Many Olympians, staffers and supporters were so touched by the plight of the Sochi street dogs, they decided to adopt some of them.  But none of these adopters has had as much of an impact as skier Gus Kenworthy, who has inspired many others to adopt dogs in their neighborhoods. 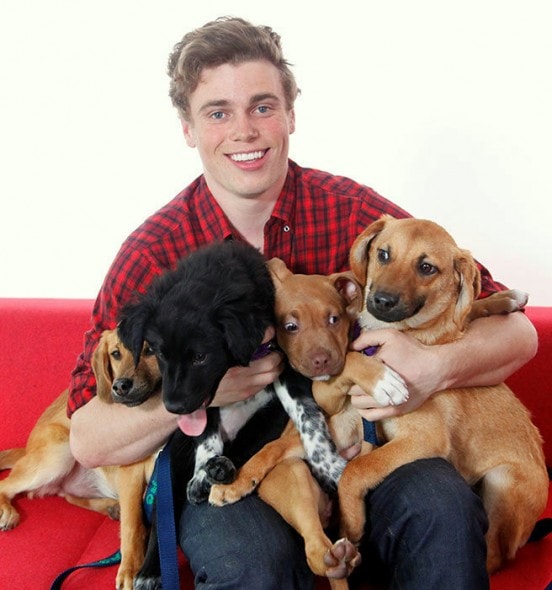 When we found out that we had nabbed an interview with Kenworthy—who is very popular these days—we decided that, in the spirit of the amazing awareness that the Olympian has raised about pet adoption, it would only be right to bring in puppies for the occasion. Luckily, Best Friends Animal Society obliged, and when he arrived, we had four adoptable pups ready to greet him. (They were such a hit, that our fashion editor Danielle took one home with her!)

Kenworthy’s Olympic success is certainly enough material for an interview, but it’s fitting that we’re splitting the focus between athletic accomplishment and puppy pandemonium. After all, it’s exactly how he spent his Olympics. “Usually, I would ski, my training would end, and I would get on a bus and go see the puppies first, and feed them and hang out with them,” he said. 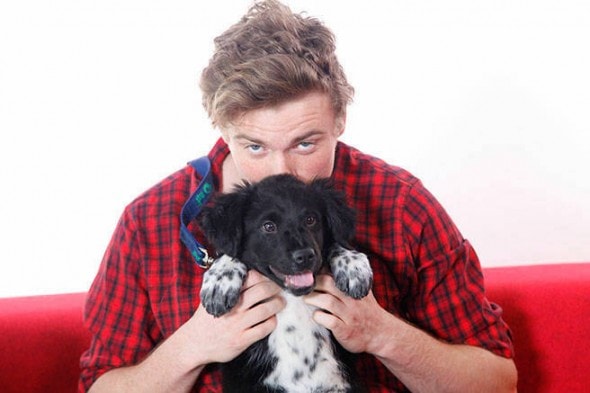 He didn’t intend for it to happen, but by doing this act of kindness in the midst of arguably the most media-saturated, widely broadcast event in the world, Kenworthy brought global attention to homeless animals—and subsequently reminded those of us watching from home that this isn’t a foreign issue, but one that exists in our own backyard. And perhaps the reason why it became so big is that there were no tear-jerking TV commercials or loud protests clamoring for our attention. Instead, a guy just decided he wanted to do a positive thing with no agenda. It was authentic, the world noticed, and we liked what we saw. 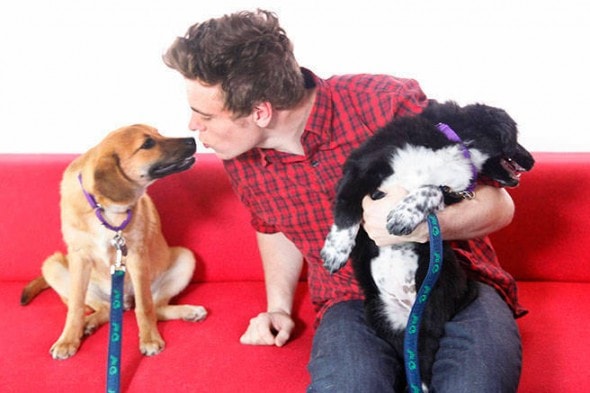 What is it like to go to your first Olympics?

It was incredible. There’s a lot of pressure, because the U.S. has so many talented skiers that could have made the team, and it was just really a fight for the four spots, so I really needed to ski well and prove myself. But then at the exact same time, I felt almost no pressure, because I had already fought so hard to get there, and it was exciting and I just wanted to embrace it, and take it all in, and not get too caught up worrying about doing well. Luckily, I really liked the course, had a lot of good practice days, and figured out a run that I knew would probably land me on the podium if I did it well.

What were you up to in Sochi when you weren’t skiing?

I was hanging out with the puppies a lot. Otherwise, I just hung out with the other guys from the U.S. a lot—there was a little arcade in the Athlete Village with basketball, and we spent a lot of hours on that. 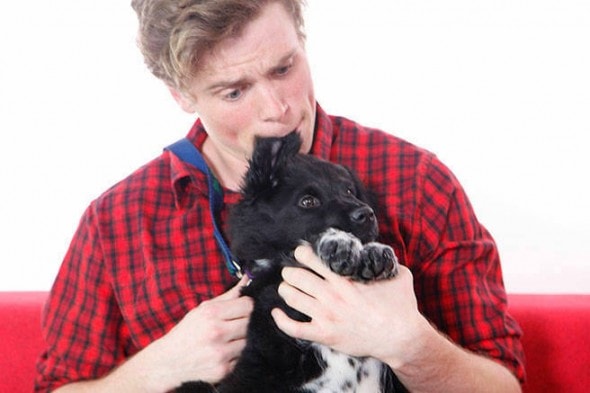 How did this whole decision to adopt the puppies start?

There were a lot of strays there, but the [ones that I adopted] were living outside the media center. My friend Robin who was out there doing media stuff during the Games saw them and sent me a photo of them because he knows I’m obsessed with dogs. I guess the rest is history—I went and saw them [in person], and fell in love with them, and needed to take them home. After I made it public that I was going to do that, it really caught on and went viral, which is awesome. Robin is still over there and he’s helping with the [adoption] process and getting everything wrapped up.

What do you think of it becoming such a viral thing?

One of the coolest things that’s happened since then is the other day we were here [in NYC] this guy came up to me and was like, “Hey, I just wanted to let you know that I work at a shelter here, and we’ve had 10 times the adoptions this week since you posted [your photos] than we’ve had in the longest time. It’s so awesome how much awareness you’ve brought to the issue and how many people have come in and adopted dogs because of it.” That was really heartwarming to know that this small act of kindness that I demonstrated really caught on, and now all these other dogs are finding forever homes. That’s awesome. 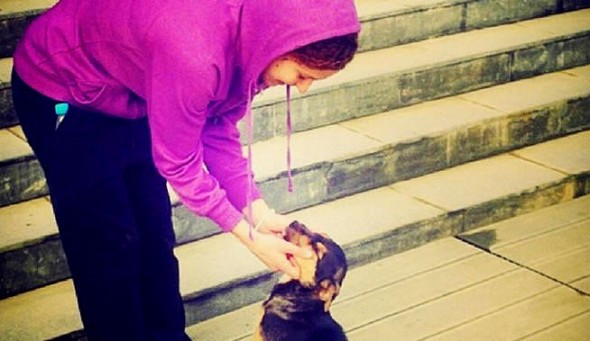 You have a new puppy! How did you first learn about the stray dogs in Sochi?

I had been hearing that there was a problem over there [with the stray dogs] and you’d just see it on Facebook. I’ve been to Chile, Argentina, and other third world countries that have stray dog populations, but it seems like there were just a lot of puppies roaming around. And that was just very hard and distracting to be witnessing that.

What made you decide to adopt one?

There was a pack of dogs that was “adopted” by our hotel—the workers had adopted these dogs, and [because] they were taking care of them, a lot of them [were] socialized. There were some that were definitely very nervous around humans and didn’t really want to get any attention from them, so they just wanted to get food. But this one guy jumped on my bag as soon as I was rolling my luggage into the hotel, and I didn’t realize it because he was so small. Then I noticed him and it was kind of a shock, like, “Man, that’s the last thing I need, looking at puppies right now.” My coach said that was going to be a very challenging thing for me. 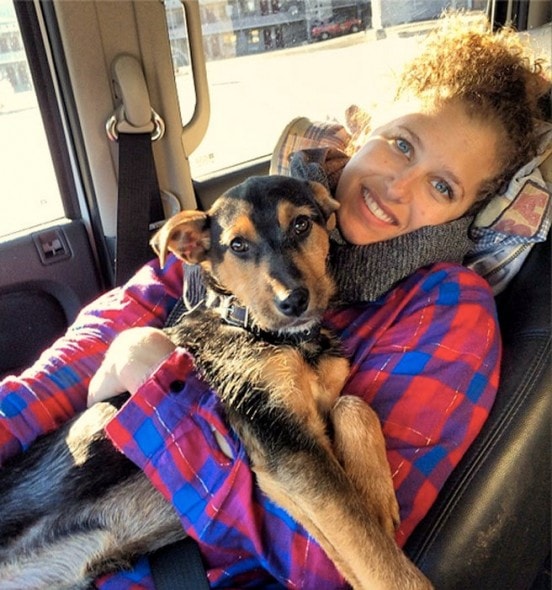 One of the first nights I was so jetlagged that I was up at two in the morning. I thought, people always say that they’re going to do something and it doesn’t really happen because there’s not enough time or enough information to work with before we make these decisions. So I started to look up what the procedures would be to bring a dog into the US. And there wasn’t a quarantine out for animals, so it seemed pretty easy to get a dog into the States. I asked the hotel, and they just asked me “Why are you doing this; why do this now? It seems silly to take a stray dog.” And I didn’t really have an answer, [except that] he deserves to have a good life and not to be hungry. And who knows, maybe this could start something—maybe not in Russia, but it could [gain] worldwide awareness. It just starts with one thing; with one movement. [In the end], it turned out to be a pretty big process.

But it’s definitely worth it!

They told me “It’s going to be around $600; you really want to do this?” I was like, “Absolutely! That’s not the end of the world—that’s like what a puppy normally costs in the States.” The back-up plan was to get him healthy enough to get into a shelter, so he would at least stand a better chance to be adopted. But now I was starting to get attached to him and feed him, and he was showing up at the hotel every day. So it was starting to solidify the decision that he would go home with me. And then I arranged for another dog—a female, one-year-old Dachshund Chihuahua—to get carried home by one of our doctors to one of my friends in Park City.

So you have your puppy now, too? What’s his name?