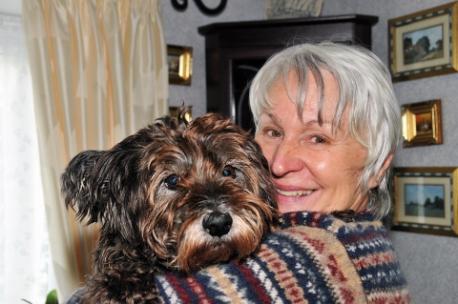 It’s good news for Millie and her owner Nadia Bounden this week, as they were reunited after Millie had been missing since November 15th.  Millie, a 15-year-old  Yorkshire/Scottish terrier cross, went missing during a week of heavy downpours and Bounden was fearing for Millie’s life.

Millie and Bounden were out on a walk together with Millie following behind when suddenly Bounden heard screeching tires and yelping.  She thought Millie had been hit but when she ran to get her, there was no sign of the dog.  Bounden said: “I ran to investigate but she was gone. I thought she’d been hit by a car, but I didn’t see it happen.”

After an article ran in a local paper appealing for help to find Millie, someone called and said they’d spotted her in a field.  After several attempts to find her in the areas in which she was last seen, Bounden discovered the water logged dog.  “She was very disorientated and has received antibiotics from the vets, just in case she had pneumonia. She’s lost around 2kg of weight.”

Given the circumstances, this is a happy ending indeed, with Millie coming home after her adventures relatively unscathed.  An extremely grateful Bounden said “We’ve had her since she was six months old. She was a rescue dog. She has no collar but she’s microchipped.” This lucky rescue dog is back home where she belongs.