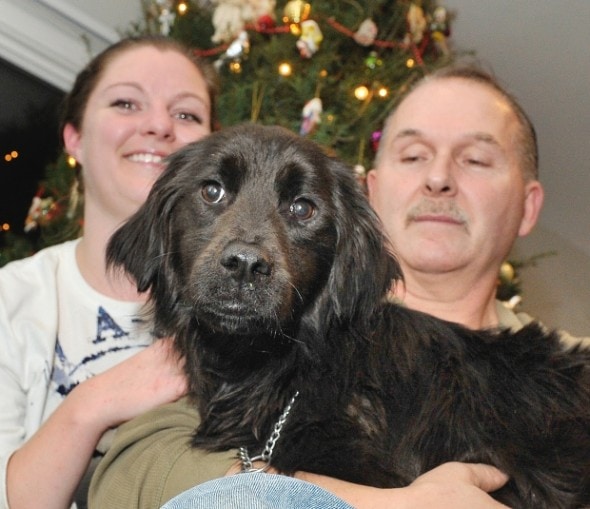 Cody went missing in the woods of North Vancouver last May while being walked off leash by the son of his owner.  He has been on the run since then, being spotted occasionally but always running away from people.  His owner, an elderly woman, has missed him terribly and is elated to know he will soon be back home.

The 4 year old flat coat retriever was found by by a husband-and-wife pet detective team called Petsearchers Canada.  “Finding him is just this feeling of absolute elation, knowing we can bring him back home to (his owner),” said Alesha MacLellan, one half of the Petsearchers team. They had been after Cody since late October and were beginning to worry about him more with winter settling in.  Ironically, a mass search with up to 75 volunteers had been scheduled for today had he not been captured.

Petsearchers specializes in finding lost dogs and cats, often using bloodhounds to track them, but Cody’s case was different.  Since we was in a reatively confined area for some time his scent was evenly distributed making it impossible for a dog to track him accurately, so instead bait and traps were used in the attempts to capture him.  In the end though, it was a net that did the trick.

“As soon as I saw him I phoned (Al) and I began moving toward Cody. We both had extra-large, heavy duty nets, one of which Cody broke trying to get free,” MacLellan said. “He started running toward me and I tried to get him and then he ran toward my husband.”  After a short struggle, Cody relaxed and gave in, and before long was eating out of their hands.  He spent a calm night curled up in a pile of laundry at the MacLellan’s home and today after a check up at the vet he will be returned to his owner.

It will take some time before Cody is completely re-socialized though, and he should not be let off leash in an open area for at least a year.  Re-socializing him will involve letting him do the approaching, and lots of food and treats and praise, which he will likely enjoy after foraging for food for the past 6 months.  None of that will matter to his owner though, as she will be thrilled to have her baby home for the holidays.