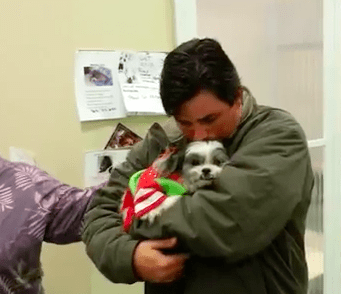 It was five years ago that the small dog was snatched up and stolen, and all hope had been given up that Bandit would ever be found.  Now, like a true Christmas miracle, Bandit is finally back home with his owner in Indianapolis.

His owner Mike says the Shih Tzu was scared during a storm and ran off.  A witness saw him being grabbed by  a man in a vehicle and even though the witness got the license number Mike was never able to track Bandit down.  He posted fliers and advertisements looking for the lost dog, to no avail.  On November 30th Bandit was picked up as a stray and sent by animal control to reTails Indy an animal rescue group.

Animal control normally scans for a microchip before shipping a dog to a rescue, but they must have missed it.  When Bandit arrived at reTails he was scanned again and his information popped up.  Remarkably, after 5 years the phone number was still current and moments later a stunned Mike was on the other end of the line.  Staff from reTails said “He stifled a small gasp and I could hear the quiver in his voice, and he said he was missing a dog, who he identified, and had been missing the dog for FIVE YEARS!”

Mike had gotten Bandit in as a puppy in Tampa in 2003.  Ten minutes later Mike arrived for his emotional reunion with Bandit, and just in time for Christmas.