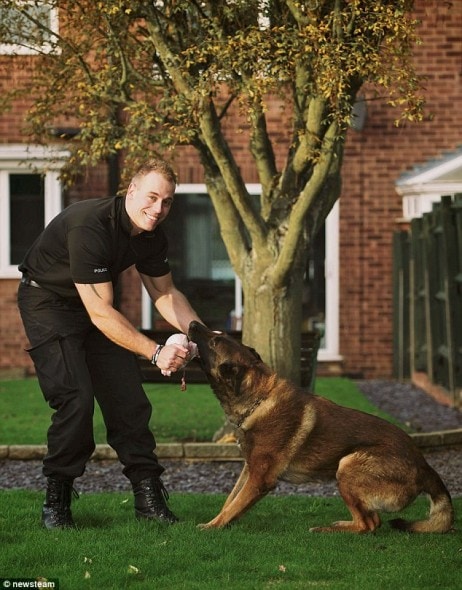 After eight years with the West Midlands Police in England Janus is retiring from the force. His impressive career includes helping to arrest almost 450 suspects in the past four years alone. At nine-years-old Janus’ only job now will to be a pet to his handler PC Dan Thomas.

Janus, a Belgian Malinois, joined the force around eight years ago. He wasn’t paired with PC Thomas until 2008. Since the pair has been together Janus has been making a huge impact on the force. The two have been nominated for numerous awards. Including two Chief Constable Commendations, the highest honor given by the police force. The two have worked very well together as a team, “Janus depended on me and I’ve equally depended on him many times when he’s come to my aid and fended off violent offenders,” Thomas said.

Janus has been known to scale 6 ft high fences and chase after sprinting suspects. His tracking and searching led to 285 arrests since 2008 and he also assisted with 157 other captures. He not only helped nab an impressive amount of suspects, but helped uncover stolen property as well. “You could tell he really loved the job,” said Thomas. “A walk with Janus always had to involve some training as he wants to stay active and not just go for a stroll.”

Thomas is very happy to have Janus come and live with his family as their pet now that he’s retired. “He’s an excellent dog in so many ways: extremely sociable, very playful, agile, fast and highly driven to work,” said Thomas. “He’ll be given the best care and attention and rightly so.”