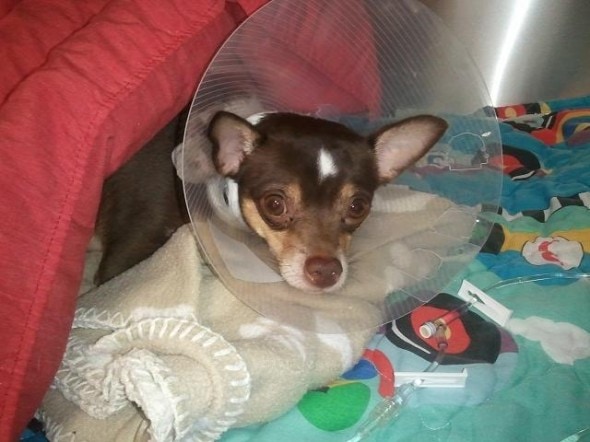 Many pet owners are not aware of how dangerous a piece of gum can be to their dog. Kathy Alderman found out the hard way when her Chihuahua Buddy got into some gum from her purse. When Buddy was brought to the animal hospital initially the vet though antifreeze was causing Buddy to be so ill, but it turned out to be just a piece of gum. The reason, the gum contained a chemical called xylitol.  The potential risk this chemical poses to dogs is worse than chocolate. Buddy became so ill that his kidneys went into failure.

Kathy Alderman had no idea how dangerous her gum could be. When one day she found Buddy with a pack of gum from her purse she took it away and thought nothing of it. “Having had a dog years ago that ate gum, she did not think anything about it,” said Alderman’s mother. “The next day he started vomiting and was sick.”

Buddy was brought to the veterinarian where the vet thought he must have gotten into some antifreeze. Alderman didn’t have any antifreeze around her home though and her car wasn’t leaking. When Buddy passed a piece of chewing gum wrapper the veterinarian asked to see the gum package. The ingredient list on the package didn’t even have xylitol listed, but a check of the product’s website showed that xylitol was in fact an ingredient in the gum.

Buddy’s condition was bad and he needed serious medical care. So far his treatment has cost over $5,000. “It took six dialysis treatments to get his kidneys working again, and a blood transfusion,” Alderman said. “At one point he had an IV in each leg, a catheter, and a feeding tube in his nose.” Buddy’s condition is improving and he should be able to come home this week. Alderman is relieved that Buddy is able to get better and wants to get the word out about the danger of xylitol. “Anything sugar free, check the labels,” she said. “If it saves two or three (pets), or if it makes just one more vet aware, it makes it better than it is.”

Xylitol is a natural substance derived from the bark of birch trees and used as an artificial sweetener. It  is commonly found in diabetic foods, chewing gum, candy and mints. The number of products containing the chemical is growing. The chemical can cause serious harm to dog’s blood sugar levels and lead to liver and kidney failure. While cats don’t seem to be affected by xylitol, in dogs it triggers a large release of insulin that causes a sudden drop in blood sugar, leading to hypoglycemia. “I’ll get calls from people saying ‘My Great Dane just ate two M&Ms,’ but xylitol is far worse than chocolate,” said Dr. Tony Johnson, a clinical assistant professor at Purdue University College of Veterinary Medicine and an emergency-medicine consultant at the Veterinary Information Network.

The veterinary medical community hasn’t known about the danger of xylitol to dogs for very long according to Johnson. “I can remember seeing cases where we didn’t know what the dog into and now we realize what it was,” Johnson said. “Back then, if I heard a dog got into chewing gum, my reaction would have been “Let him chew it.’” The number of poisoning cases involving xylitol has been growing significantly in the past few years according to the ASPCA’s Animal Poison Control Center.

Anyone wishing to help with Buddy’s care a Go Fund Me Site has been set up to help aid with the expensive medical bills incurred by his xylitol poisoning.