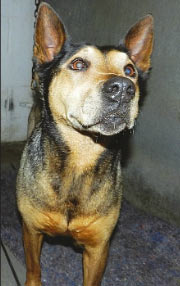 A dog that was rescued off a New Jersey cliff is in need of home as it appears that no one is coming forward to claim her.  The collie mix, who has been named Dingo, was on the run for about 5 days before she became stranded on a cliff in Hopatcong.  Animal Control Officer Dale Sloat had been tracking her but she was elusive and when she was rescued from the cliff the collar she had earlier been seen in was gone.

She is a sweetheart,” said Sloat recently about the dog who alerted that she was in trouble by howling from her perch about 75 up a cliff face.  Sloat and police were called in to help and Sloat was able to lower himself down with a rope and bring her back safely, but then she escaped again. The next day a police officer picked her up and brought her in to the pound, where now named Dingo, she awaits a home.

Dingo is estimated to be about 4 or 5 years old and has two tumors, one on the back of foot and another on her chest.  Sloat would like to have them removed if the pound can afford it, as it will make her much more adoptable.  Sloat is the go to person in the area when it comes to dog rescue, and has been called in to save dogs from icy ponds, and even animals that have been hit cars and left behind on the road.

Dingo is not alone at the Hopatcong pound, she has a pal named Barney, a red nosed pit bull who found Sloat and jumped right into his truck about 3 months ago.  Barney is sweet, well trained, and good with children, and Sloat says “I just melted, he is going to make someone a great dog.”  Both dogs would be wonderful additions to a family and anyone who would like to adopt these or other pets at the Hopatcong pound should call 973-770-1200 and ask for Animal Control.