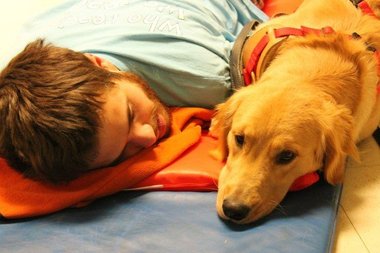 A dog named Zuzu has given a young man some much needed confidence and independence.  Twenty-five year old Alex Smith suffers from autism and has seizures every few months that leave him unconscious and sometimes injured.  They take so much energy that he simply collapses when they are over and has no recollection of what happened. leaving him always fearful about when the next one will strike.

Zuzu, a golden retriever trained by 4 Paws for Ability, is helping to change all that she can sense a seizure coming and warn Alex by licking his ear, neck, and face, in a very intense and purposeful way.  This will allow him and others around him to protect him before it starts.

Alex is a 5 on the autism spectrum which ranges from 1 to 10 and so is fairly withdrawn because he has trouble communicating verbally.  But he loves Zuzu because she bridges the gap during interactions with other people.  “He’s really proud to walk with her in town,” says his mom Kristine, and when people come forward to admire the dog “the focus is not one hundred percent on Alex, and he doesn’t have to make eye contact” because the dog is the center of attention. And when Alex becomes sad or angry, Zuzu will nuzzle him and help bring him to a more positive state.  For that she is priceless.

Alex’s parents had to raise $13,000 to get Zuzu and they did so by partly by having a benefit concert to raise awareness for the organization.  They also participated in an intensive 12 day training program once Zuzu was ready to go to Alex.  The training was done with other families getting seizure detection dogs and at one point the instructor noticed all of the dogs air scenting.  He stopped and said ‘Somebody in this room is going to have a seizure.’” And a boy named Joel had one an hour later.

Zuzu has changed Alex’s life, and for that he and his family are grateful.  For more information visit 4 Paws for Ability.