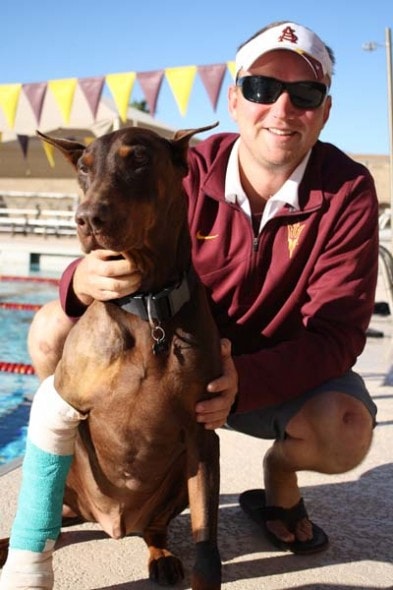 Dan Kesler patiently waited seven years to get the phone call he always hoped for. Four weeks ago he finally got that phone call. His Doberman B.A. had been found and they were going to be reunited.

When B.A. was three years old he ran off in a thunderstorm. “The first night I spent outside waiting for him to come back, because I honestly thought he would come back that night. Within a week I thought he would show up – but then as weeks turned into month and months turned into years…did I think he’d be back – I can’t say yes. But I never gave up hope,” said Kesler.

When B.A. went missing Kesler lived in North Carolina. He currently lives in Tempe, Arizona where he works as the assistant swim coach at ASU. He made sure he never changed his number though. He knew B.A. had a microchip and he was hopeful that one day he’d get the call that he’d be found. “Yeah I never changed my number throughout the years depending on the job or wherever I was at – I never changed the number just in case this happened.”

Last month B.A. was found wandering the streets of Durham, North Carolina in pretty bad shape. He was taken to the Humane Society where a scan for a microchip brought up Kesler’s number. He finally got the phone call he was waiting for. “Oh my god it’s my dog – I have to do whatever I have to do to get my dog back!” recalls Kesler. At the beginning of this month B.A. flew to Arizona to be reunited with Kesler.

Kesler can hardly believe he is finally reunited with his beloved dog. “There’s so many things that had to line up throughout this whole process that ended up lining up. To be able to have him back as well,” he says. “It’s amazing. It’s absolutely amazing.”