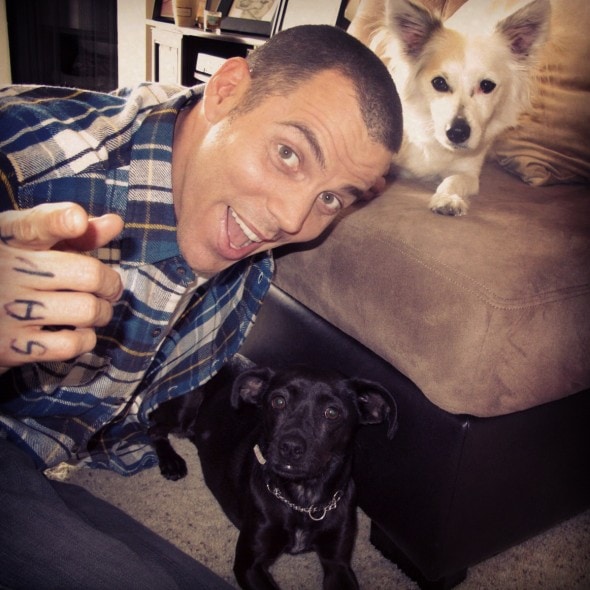 Steven Gilchrist Glover, better known to fans as Steve-O, spent years on Jackass movies and shows performing stupid stunts.  A couple of his more dangerous feats include putting a large hook through his cheek and being human chum in shark-infested waters, and being catapulted while in a port-a-potty.  Years of unbridled drug and alcohol use fueled his dangerous lifestyle and MTV attention gave him a reason to live.  Now that Steve-O has a new reason.

Four years and eight months ago Steve-O jumped on the wagon, and soon after adopted Walter, a black Chihuahua-Dachshund mix.

“They had these cages set up on La Cienega [Boulevard], by the Beverly Center,” he explained.  “I came by and there’s Walter.  I picked him up and I looked at him, and I thought, ‘I’ve got news for you Walter Cronkite, you are gorgeous.’  And then I was like, ‘His name’s Walter.’”

The next year he adopted Bernie, a white mix-breed.  Like many, he can hardly remember life before dogs.

“You know, the way I feel about it, and it might sound a little weird as far as comparisons go, but getting a dog reminds me of getting a cell phone because there’s that overwhelming feeling when I first got a cell phone of ‘How did I ever live without this and what would I ever do if I lost it?’” Steve-O said.  “It’s very much the same way with my dogs.  I just think back to before I had my dogs and my life must have been just so empty.  I shouldn’t say so empty, but I can’t believe how much those little (expletive deleted) have enriched my life.”

Perhaps Steve-O finds such a strong connection with his boys because like him, they also have shortcomings.

“They’re terribly complicated little guys,” he says.  “They’re very dog-aggressive.  Walter is super food-aggressive.  Bernie is a rampant urinator, he just has to mark everything, but they’re my babies and I love them so much.”

Steve-O’s new-found fervent love for animals has extended beyond pet ownership – he has also become vegan.

He has a new show that premiered on TruTV on November 23rd called “Killer Karaoke,” which challenges contestants’ music trivia while they have to endure such things as wearing a shock collar.  While it elicits a lot of laughs, it’s also done to illustrate a point.

“It’s horribly painful,” he said.  “To me, that’s really something good that we’re doing in the world to see how much that hurts people.  I think it is a very noble service because it exposes dog shock collars as inhumane devices.  You have to be pretty cruel to put that on a dog.  I have high hopes that this show will deter people from using those cruel dog shock collars on animals.”

The former bad-boy had no problem getting his nose gushy for the stunt on the Roast of Charlie Sheen where he rammed his face into Mike Tyson’s fist, but now he spends more of his time getting gushy about dogs.  He says Walter has taught him about love and tolerance.

“In my personal life, I regret the way I treated people who loved me.  I carried a lot of guilt and shame,” Steve-O said.  But now his dogs and his vegan diet have “benefited every area of my life.”