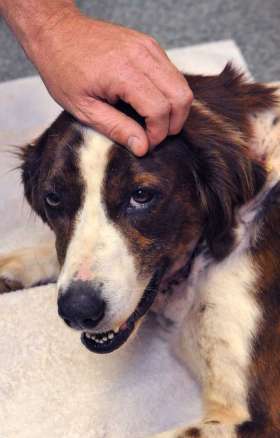 A dog has a new home and her abuser is behind bars.  Amber, the dog that has been described as “sweet as pie” was stabbed several times by her owner and then dragged, howling into the woods where she was left to die.  Thanks to a witness who reported the crime to police, the 4 year old collie/lab mix was found and her life was saved.

Randal Bryen Hart, 28, was charged with animal cruelty and is currently in jail.  He claims that he had to put the dog down because she attacked a kitten but there is no evidence to support his claim.  “She’s sweet as pie,” said Herb Loeman, the veterinarian who treated her and even took her into his own home over the weekend. “This is not an aggressive animal, not in the least.”  Hart surrendered the dog to animal control upon his arrest. 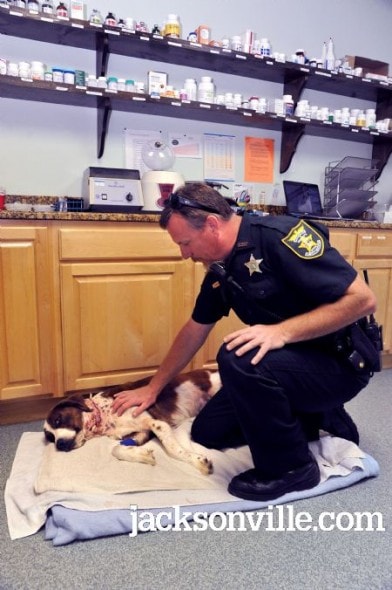 Fortunately for Amber, she will recover fully from her wounds, which include puncture wounds on her chest and a long gash along her neck, though it will take a few weeks says Loeman.  Dan Sorrells, the deputy who found Amber is now giving her the loving home she deserves.  Yesterday Amber went home for good, with Sorrells, his wife Mia, and their daughter Ashley.

As for Amber, she doesn’t seem to be affected by the abuse and was happily greeting everyone she met at Atlantic Veterinary Hospital in Jacksonville, where she was taken for treatment.