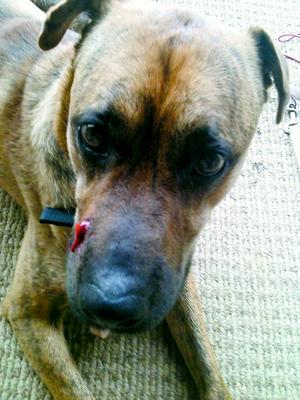 Gus, a 2-year-old boxer/shepherd mix, made the mistake of wandering into a neighbours yard last Friday just outside of New Philadelphia.  The error was almost deadly as the neighbour shot him in the face with a .22 from about 10 feet away.  By Sunday, he still had not been treated for his wounds so Julie Trpodi of Operation Warm & Cozy stepped in to help.

Gus’s owner allowed Tripodi to take Gus for treatment on Monday and also agreed to surrender him for adoption.  Tripodi took the dog Monday to West End Animal Hospital in Alliance, where it received emergency care from Dr. Jeffrey Baranack.  The bullet was left in the snout because they feared removing it might cause internal injuries. Gus is recovering now, and is on antibiotics.

Thought this was a cruel and heinous act, Tripodi says owners must keep track of their pets to avoid this kind of incident. “The dog was getting loose and running up and chasing a neighbor’s animals,” said Tripodi. “It’s important for owners to keep a dog on a leash.”

Now Gus needs help to pay for his treatment.  The cost of his treatment and care is expected to exceed $1000 and donations can be made through Operation Warm & Cozy.   Gus also needs a loving home now that he has been surrendered.  “We have a dog who needs an immediate foster family,” said Tripodi. “He’ll be neutered and vaccinated. He’s a great dog and is house trained.”  For information on fostering or adopting Gus go to adoptions and help Gus the life he deserves.