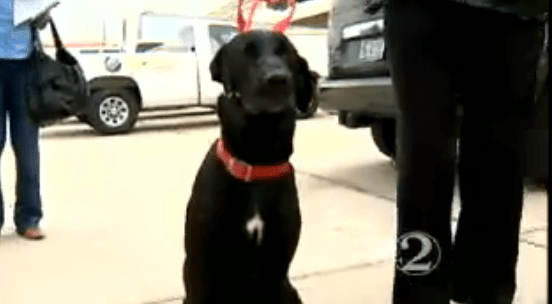 Two months ago you heard about Dante, the black lab that saved Gudrun Mastriano from a dangerous cottonmouth snake.  Mastriano was out walking with Dante when he saw the snake, leapt forward and tossed it away, being bitten himself in the process.  “The snake turned around and went after him into the embankment, viciously, and got him,” said Mastriano. “It could have been me, I would have died.”

Dante was staying with Mastriano because his owners (Mastriano’s daughter and her husband) were transferred to a naval base in Madrid.  Dante was booked to travel to Spain one week after the incident with the snake which almost took his life.  Fortunately the 3 year old dog was saved using anti venom and seven sessions in a hyperbaric chamber which had just been installed in the SPCA in Lakeland.

The snake’s lethal venom caused his snout to swell to about 17 inches, and the time in the chamber served to reduce the swelling safely and painlessly by delivering concentrated oxygen into the damaged cells to speed healing, said Kim Domokos, one of the SPCA veterinarians who treated Dante.  Mastriano is grateful that Dante is now back to normal and ready to be reunited with his family in Spain, though she will miss him dearly. 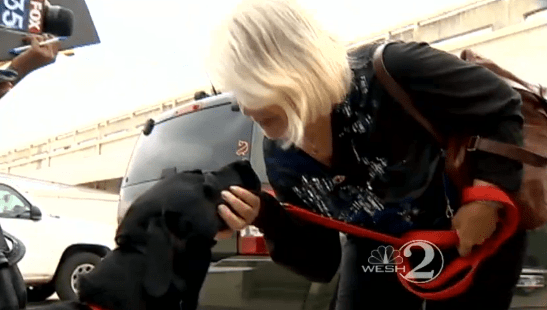 “We’re just happy to see him healthy and going home for the holidays,” said Domokos, who was on hand along with Mastriano for Dante’s farewell at the airport.  Mastriano is already planning a September visit to see Dante and her daughter and son in law.  “He’s my hero,” said Mastriano.  Until then, she will have her own dog, Ludwig, to keep her company at home.