For Charity, a beautiful reprieve after years of neglect 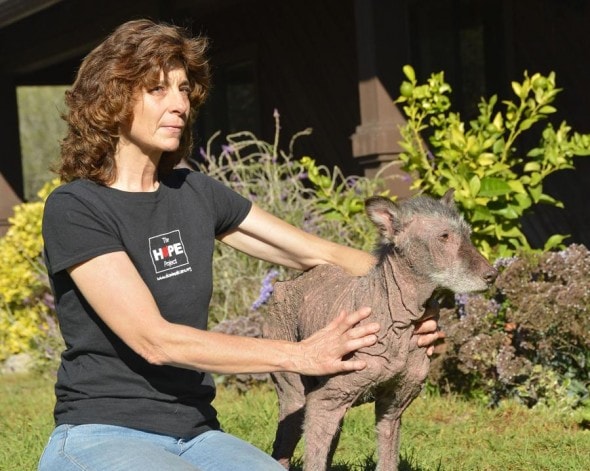 Charity was found starving and abandoned in front of the Santa Maria animal shelter on November 4th.  The German Shepherd, estimated to be about 9 years old, was emaciated and nearly bald due to a raging yeast infection which left open wounds on her skin that oozed. Tami Hurley, the volunteer who found her said, “I turned the corner and I saw her, and I literally just started crying. It was a gut reaction.  The smell was almost as bad as the look.”

Hurley coudn’t  bear the thought of this old dog dying alone and in misery.  So she took her home, and fixed her a lovely bed, and cooked her home made food. “I didn’t want her to die alone or without having experienced compassion,” Hurley explained.  A trip to the vet revealed that the dog had clear lungs, a strong heart and other healthy vital organs.

Hurley began bathing Charity twice a day to control her itching, and continued to feed the ravenous dog every few hours, though weight gain has been slow.  “She was a different dog in just a matter of days,” Hurley said. “She’s doing dog things now. I heard her bark for the first time the other day, so that was fun.”  Charity now loves to go for walk, where a few weeks ago she could barely move.

And Charity is very affectionate and not at all aggressive, says Hurley.  “It’s amazing how much she lets me touch her, she could be aggressive and she’s not. She definitely has that look of ‘I trust whatever you’re doing with me’.”  It is clear that Charity understands and is grateful for being a chance at life, with a family who loves her.

Linda Greco, president of the Animal Care Foundation says, “This dog has the will to live. It’s kind of hard not to feel like a person needs to do something,” she said. “As long as the spirit isn’t broken, and obviously hers isn’t, all it is then is resources and love.”  Charity’s care is costly due to ongoing medication and special food that she will require.  If you would like to help please contact the Animal Care Foundation or Santa Barbara County Animal Services.