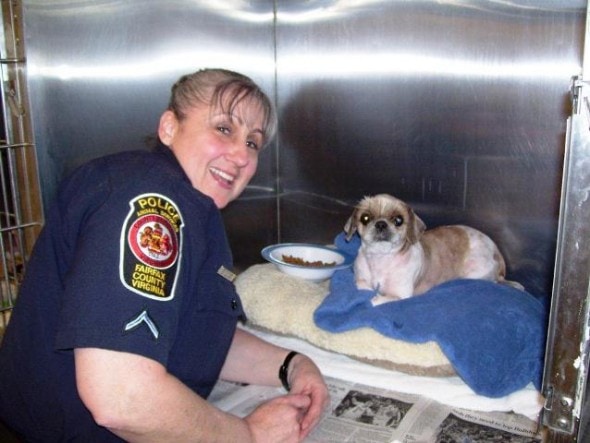 For two years a Shih Tzu remained an elusive stray in Franconia, Virginia. Then Animal Control Officer Enna Lugo and a group of volunteers finally captured the little shaggy dog and have gotten him the care and love he needs.

No one knows exactly how the dog, which children in Franconia had named Biscuit, became a stray. The best guess is that his previous owner abandoned him when they moved or he was left on his own after his owner died. For two years he has been living off any food he can find and staying far away from those who have been trying to save him.

For months the community and professional rescue groups had been trying to capture Biscuit. Officer Lugo had attempted to track and trap the dog but was unsuccessful repeatedly. “He would always find an escape route,” she said. “When we tried to trap him, he would lie next to the traps but would never go inside.” Lugo knew it would take multiple people to finally catch Biscuit.

On Saturday Officer Lugo along with Fairfax shelter employees and volunteers finally got close enough. Friday morning the group arrived at Biscuit’s usual spot under a patio. “Officer Lugo was concerned that he had fled the area,” stated a new release from Fairfax County Police Department. “But he was soon spotted nearby, huddled in a nest of leaves where he had made a bed.” Lugo and the volunteers surrounded Biscuit and were able to catch him with a net. 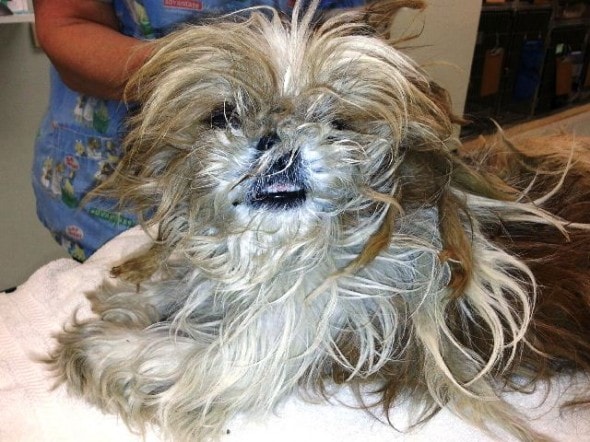 Once captured Biscuit was brought to a veterinarian where he was sedated and cleaned up. Over forty ticks were removed from him and he had a skin infection. He was luckily though in good health otherwise. Biscuit is estimated to be around three or four years old. Although he had kept his distance for so long once at the vet he allowed Lugo and staff to hold him and pet him.

Biscuit will be living with Officer Lugo who has volunteered to foster him until he is adjusted to his new life indoors and is ready for adoption. Officer Lugo is relieved that he is now in a safe environment and the long months of hard work paid off, “I told the resident that even if it took me a year, I would catch Biscuit and get him a loving home.”