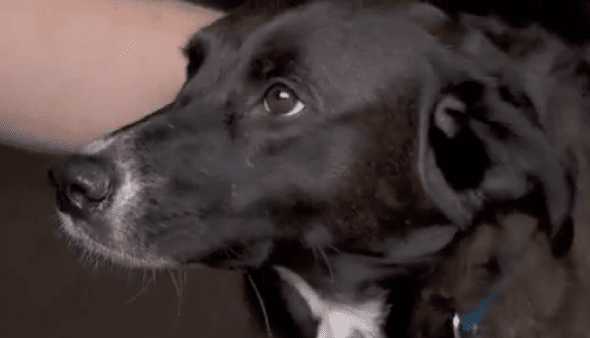 When Lucy began barking out the window her owner Kerri Cooper went to investigate. When she looked out the window she saw a two-year-old boy wandering toward a pond all by himself. By the time Cooper got outside the boy was neck-deep in water. She was the only one there to save the boy thanks to Lucy’s barks.

Lucy, a black lab and golden retriever mix, was looking outside her window Friday when she started to bark in a manner that alerted Cooper. “She was definitely alerting me that something was going on,” said Cooper. “She was definitely upset.” Cooper went to the window and saw a toddler heading straight for a pond outside the apartment with no one around watching him.

Cooper ran outside and got to the boy just before he went under. “I’m glad I got there in time,” said Cooper. “A couple minutes later, he’s under, 100 percent.” Cooper was the only one there to save the boy. “When I realized I was the only one, I knew I needed to step in,” she said. Cooper took the young boy to the office of the apartment complex and called 911.

Authorities arrived on the scene and arrested the young boy’s grandmother who was charged with child neglect and criminal mistreatment. Washington County Sgt. David Thompson says the grandmother had been drinking and fallen asleep when her grandson wandered toward the pond outside. Thompson give Lucy and Cooper all the credit for saving the boy from tragedy. “There’s no doubt that due to her attentive dog, and her quick actions, Ms. Cooper saved the life of the young boy.”