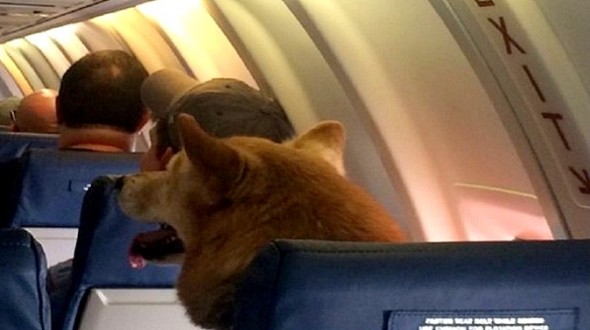 Back in November, we brought you the news that Delta Air Lines would no longer be forcing pets to fly as cargo beginning in March of this year.  But some dogs have already been enjoying the perks of flying as a regular passenger, and a photo of one of them has quickly gone viral.

Emotional support animals and service dogs are already allowed on board, so it looks like this guy hasn’t been made to wait with all the other “regular” dogs.  (I say this very tongue-in-cheek.)

But at least seeing a dog sitting nearby wouldn’t raise many eyebrows, unlike the support pig and support turkey that recently took to the skies.  (Okay, I can understand the pig, because they’re almost just like dogs, but a turkey?  Come on.)

Twitter user NickWeathers14 tweeted the photo he snapped on Delta flight 4640 from Atlanta to Chattanooga, and the replies were just what you’d expect.

@NickWeathers14 @Delta It’s okay, he is a rescue dog.