An autistic child find independence thanks to her dog 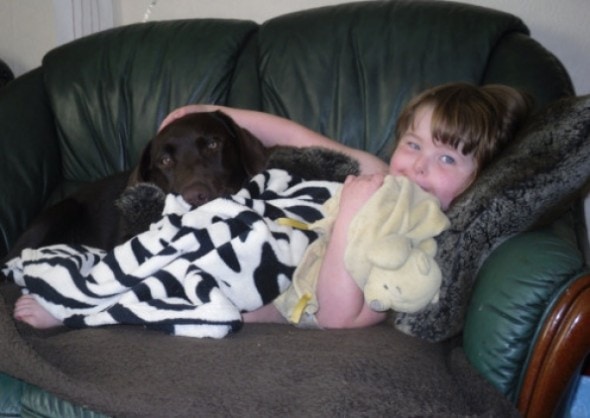 The life of a 6 year old autistic girl has changed dramatically, thanks to her dog.  About a year ago, Rolo came into Holly’s life and the young girl who could not stand to be away from her mother now has some much needed independence.  Rolo is specially trained as part of the Dogs for the Disabled PAWS program to work with autistic children like Holly.

“Rolo has been a godsend. He is a real member of the family, but more than that he has really helped Holly,” says Amanda Moreman, Holly’s mother. “She has sensory issues which means she doesn’t like to be touched. It meant that she would only let me touch her, comfort her or do things for her, which has been very hard on her dad. She is also audio defensive, which means she just can’t cope with certain types of noise. Life was really quite difficult.”

As Holly struggled in school and Amanda reached out for support, she heard about PAWS and decided to give it a try, though she worried that bringing a dog into the situation would just make life harder and more complicated.  But Amanda decided to take the plunge just over a year ago and bought chocolate Labrador Rolo. “I’d read about the interaction between dogs and children. We took Holly and her brother to choose Rolo. She was fixated by him immediately.”

“Dogs have an incredible calming effect when a child with autism is angry, anxious or distressed,” says Katie Bristow-Wade, Project Team Leader for Dogs for the Disabled’s PAWS.  Unlike other assistance dogs that are trained at length before being placed, PAWS dogs are normally existing family pets, specially trained at one of the PAWS workshops held regularly around the country.  “If a child is having a tantrum and can’t be calmed down, then the dogs are trained to just put their paw on the child’s arm, or play ball with them. It just defuses the situation,” explains Katie.

Holly’s life is very different since Rolo came into it.  “My dog is my best friend,” she says, happily chattering about Rolo. “He licks my face and I don’t mind. But the best thing about him is that he is  always there for me and plays with me.”