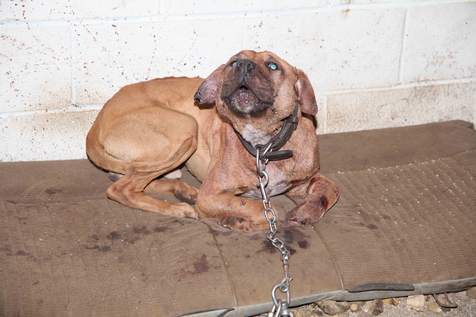 Police rescued at least seven dogs when they broke up a dog fighting ring in Dolton, Illinois. Eight people were arrested during the bust.

As police busted the operation nearly 20 people attending the fight fled the scene. Two men who fled to a nearby wooded area were caught almost immediately. Police then discovered six men who were hiding in the rafters of the abandoned building. All eight were arrested.

Police found a makeshift ring, dog-fighting narcotics, and a treadmill inside the building. They also found three injured dogs. Four additional dogs were found locked in crates inside vehicles. The South Humane Society has taken the dogs in and they are receiving medical treatment. The dogs are very aggressive and will have to be rehabilitated before they will be ready for adoption.  If you wish to contribute to the care of the rescued dogs from the Dolton dog fighting ring you can make a donation through their website.