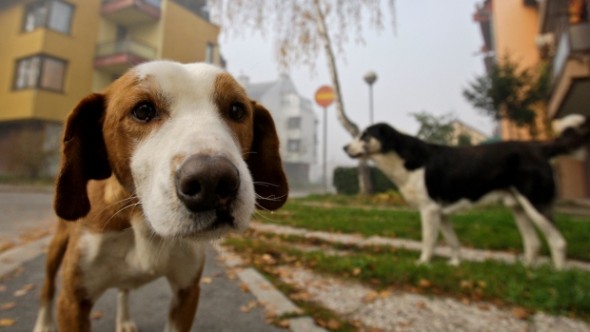 Four years ago a law was passed in Bosnia making it illegal for people to kill stray dogs.  Unfortunately, no provisions were made to enforce the law, or prevent the proliferation of stray dogs and so the practice continues to be rampant.  But in Sarajevo, which was the scene of some of the worst warfare during the Balkan wars, animal rights activists have created a safe haven.

Amela Turalic, one such activist, believes that the government should have trained vets to neuter the animals and built shelters so they could be adopted or released to live out their lives without reproducing.  “We have a perfect law,” said Turalic. The problem, she said is that, “the law was adopted almost overnight without anybody providing the conditions for its implementation.”

Since March that has been changing, at least at a new city funded shelter run by Turalic in Sarajevo.  It took Turalic 3 months to get the stray dog problem in her city under control.  But then new faces started turning up as people in other regions worked to save canine lives.  Now dogs from all over the country are being delivered there, at all times of day and night in an effort to keep them alive.  “Dogs and also cats are treated as communal waste here,” said Bogdana Mijic, from the animal protection group Noa, based in Banja Luka, the administrative capital of the nation’s Bosnian Serb region.

“But then we started noticing ‘new faces’ on the streets daily and people started telling us about overnight deliveries,” she said.   It has turned Sarajevo into a stray dog haven, and Turalic often gets calls in the middle of the night alerting her to “deliveries”. “Let them come,” Turalic said. “People do this with best intentions.”