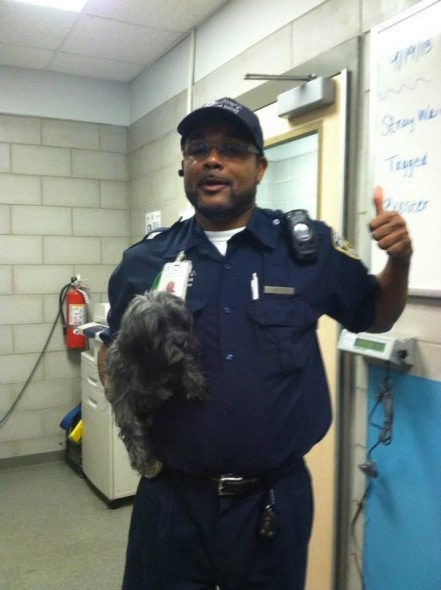 On Thursday morning Dallas Animal Services receive a frantic call that a dog was drowning in the middle of White Rock Lake. Officer Pogue arrived on the scene but had no way to get out into the middle of the lake. Pogue quickly went to a guy that owned a canoe shop on the lake and talked him into borrowing a kayak.

“They said ‘You’re actually going to do that?’ and I said ‘Yes, I gotta go, I gotta go,” said Pogue.

Pogue then rowed the canoe all the way out to the drowning puppy, which was clinging to a log, and saved her.

“The current was pretty strong where she was, and I could imagine her getting swept away,” said Pogue. “She was very frightened, and I tried to calm her down because she was snipping at me. Once I showed her love she calmed down. We got to the shore. I made sure she didn’t have any injuries and I talked to her, made her feel real good.”

The puppy had no tags and no one is sure how she ended up in the middle of the lake. Pogue said the dog appeared to be taken care of. Anyone searching for a lost pet can contact Dallas Animal Services at their website or by calling 214-670-6800.