A woman moving from Alabama to New Jersey has been reunited with her beloved dog after he went missing from the scene of a major accident, all thanks to an amazing community of people that went out of their way to help her in her time of need.

Mary Ellen Frazier was heading to New Jersey from Alabama, and had planned a stop in Kansas City, MO to visit a friend when she was in a bad accident. She doesn’t remember all the details, but said she started to feel sick, and swerved out of her lane. She clipped another vehicle and her Honda CRV veered off the highway and rolled five times.

She spent the next several days in a hospital, and checked into a hotel when she was released. Her SUV, which had been full of her belongings, was totaled, but she was more concerned about the loss of her dog. The six-year-old golden retriever vanished after the accident.

“People who don’t have a pet might not understand, but Bailey is my baby,” she said. “I love him dearly, and he loves me.”

St. Peters resident Cindy Kielty was on her way to the gym when she came across the woman. Mary Ellen had been walking to a Subway near her hotel, but suddenly felt weak and stopped to rest under a tree in a parking lot.

“I thought, something’s not right, so I asked ‘Are you OK?’”

Cindy noticed Mary Ellen’s recent bruises, and thought she looked like she was in pain. Mary Ellen explained what had happened, how she was alone, and how badly she wanted to find Bailey.

“She was so lost and needed help, and I think she was more worried about her dog than she was about herself,” Cindy said.

She didn’t hesitate to help the down-on-her-luck woman. Cindy drove Mary Ellen back to her hotel, and went to a drug store to buy her some pain medication. She called her several times that day to check on her, and to make sure she had the number for the county animal shelter.

“It’s just awful to be in that situation, to not to have anyone there that you know,” Mary Ellen said. “But Cindy was so kind to me. She could have just walked into the fitness center and had her day, but no, she really rescued me.”

That’s not all she did. Cindy told her husband Ken about the encounter, and he started making calls on Mary Ellen’s behalf. He contacted Len Pagano, mayor of St. Peters, and relayed the information about the lost dog.

“The mayor basically put out an APB on that dog,” Ken said.

The mayor brushed the praise aside, noting that the city’s animal control unit and police department were already on the hunt for Bailey.

“All we did was be a good neighbor, and put out a good welcome mat for the city of St. Peters,” he said.

Mary Ellen’s friends were making the trip to help her, and picked her up the next day. Sadly, it was without Bailey. But two days later, she got the call she had been praying for – Bailey had been found! Animal control spotted him and brought him in. He had suffered no major injuries from the accident, just abrasions on his paws, which came later. 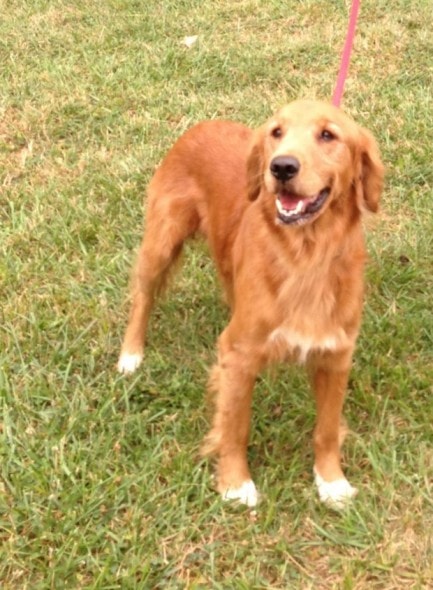 “He apparently had been running up and down the highway (looking for Mary Ellen),” said AC control officer Carol Schulte.

Ken drove to the shelter and took a picture of Bailey, which he sent to Mary Ellen.

Three days later, her son drove from Alabama to collect the much-missed dog.

“I’m overwhelmed that people would go to these lengths for me, a stranger, and my dog,” Mary Ellen said.