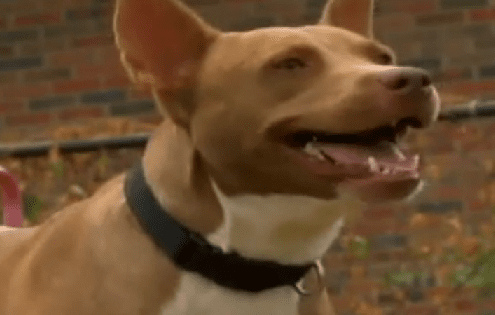 When a fire broke out in an elderly man’s home Thursday morning his neighbor’s pit bull was the first to notice. Xena’s nonstop barking alerted her family to the fire and they were able to make sure the man made it out safely.

Tina McDaris knew something was wrong when her dog Xena would not stop barking,

‘She was just insistent at that gate that something, something was terribly wrong,” said McDaris. “That’s when I went to the side and saw the smoke.”

McDaris immediately called for help and made sure her elderly neighbor Owen made it out of the burning home safely. McDaris has been neighbors with Owen for ten years.

Without Xena’s barking McDaris probably wouldn’t have known about the fire so quickly.

“If it wasn’t for my dog going crazy at the fence barking I don’t think my mom would’ve noticed there’s a fire next door,” said McDaris’ daughter Misti.

Although smoke detectors were working and the neighbor’s alarm company was eventually notified of the fire, Xena’s alert was the first helping firefighters to arrive on the scene faster.