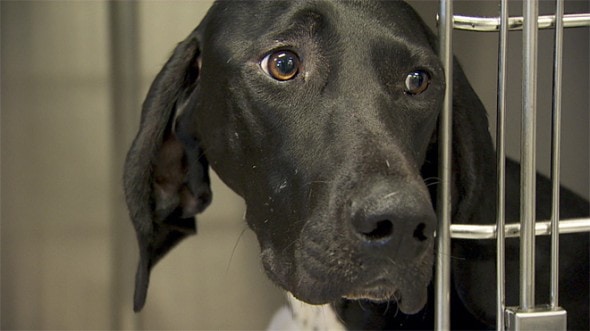 Pepper is more than just Army veteran Luke Hunt’s dog, Pepper is his world. Earlier this week Pepper was shot and needed expensive surgery that Hunt couldn’t afford. Then people started donating to help Pepper and Hunt, including an anonymous donor that gave $6,000.

Pepper knows when Luke is struggling and is there to help in every way she can. If Luke is distressed or blacks out Pepper immediately runs to his side or gets help from one of his family members.

“You can tell something is bothering him and 10 minutes with her and he’s back to normal,” said Hunt’s father Don.

On Tuesday Hunt went out into the backyard of his parent’s Oregon home to find Pepper had been shot.

“She came down from where she was shot and then as soon as she saw me she just laid down because she knew that I would take care of her,” said Hunt.

Hunt’s friend set up a donation fund on Go Fund Me for Pepper, but no one could imagine the response it would get. On Thursday night an anonymous donor gave $6,000, the estimate for Pepper’s entire bill, to the veterinarian’s office that is caring for Pepper. By that time Hunt’s friend had already raised another $13,000 on his Go Fund Me page.

The additional funds raised are now going to be used for future patients in need at VCA Northwest Animal Hospital and to set up a fund for disabled veterans and service dogs.

Police are still looking for those responsible for shooting Pepper. Anyone with information is asked to call the Clackamas County Sheriff’s Office.