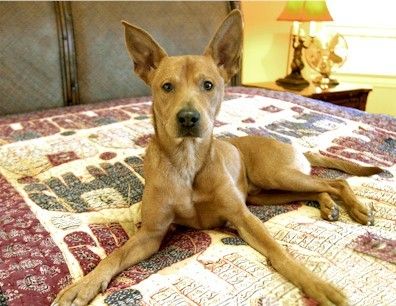 Quentin the Miracle Dog will make his last public appearance at his final book signing in St. Louis next week. His book tells the incredible story of how the shelter dog survived being euthanized and went on to educate the country about the millions of dogs that are euthanized each year at shelters.

In 2003, Quentin was facing his last day at a shelter in St. Louis, Missouri. He was led into a gas chamber with seven other dogs. After spending 15 minutes in the gas chamber and receiving a lethal dose of carbon monoxide shelter workers were shocked when they opened the door and there stood Quentin alive.

One of the shelter workers called Randy Grim, founder of Stray Rescue, and pleaded with him to take the miracle dog. Grim took the dog in and adopted him himself. He was also inspired to tell Quentin’s story. “Miracle Dog: How Quentin Survived the Gas Chamber to Speak for Animals on Death Row” was published in February 2005.

Grim and Quentin traveled around the country promoting the book, campaigning against the use of the gas chamber and supporting no-kill shelters.  They have appeared on numerous national television shows bringing Quentin’s story to a large audience.

On October 4th Quentin will make his final public appearance at a book signing in St. Louis. The event will also be a retirement party for Quentin to celebrate his story and what it has done to bring awareness to the millions of shelter dogs that need saving across the country.