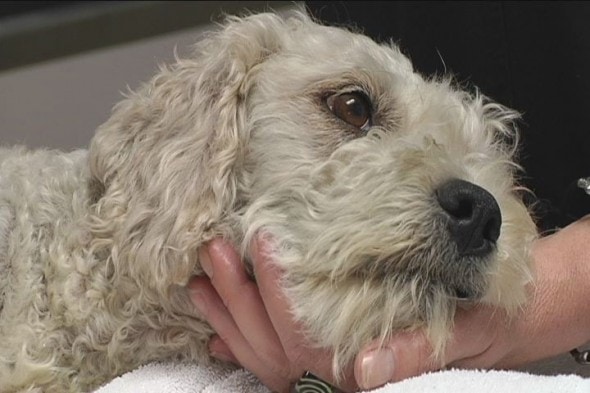 When Bandit was hit by a car on Christmas night the driver drove off leaving him in the middle of the road. Thankfully the next driver to come along came to Bandit’s rescue.

Bandit a poodle mix was hit Christmas night in Bradenton, Florida. Left in the middle of the road Bandit needed someone’s help to have any chance of surviving. While the driver who hit him fled, the next driver to come along became Bandit’s hero. The driver stopped her car and rushed Bandit to the Veterinary Emergency Center in Bardenton.

“He was essentially comatose when he came in,” said Dr. Ilonka Ambros. “Initially we thought he wasn’t going to make it”

If the anonymous driver hadn’t stopped her car and rushed Bandit to the emergency clinic he would not have survived. He had internal injuries, road rash and several cuts and bruises.

Bandit now needs more help. His microchip did lead to a previous owner, but unfortunately that owner had given Bandit away over a year ago and does not want Bandit back. A fund has been set up to help cover the cost of Bandit’s veterinary care. You can contribute by visiting this link.

Bandit will need to spend time in foster care as he recovers before he will be ready for adoption.

Vet Recommended Dog Food
Nulo Dog Food Reviews
Prednisone for Your Dog
Apoquel for your Dog
Do German Shepherds Smell? Why & How to Make Them Smell Better
Top Dog Foods for French Bulldogs
What’s the Best Dog Food for Your Pomeranian?
Best Dog Foods for Diarrhea