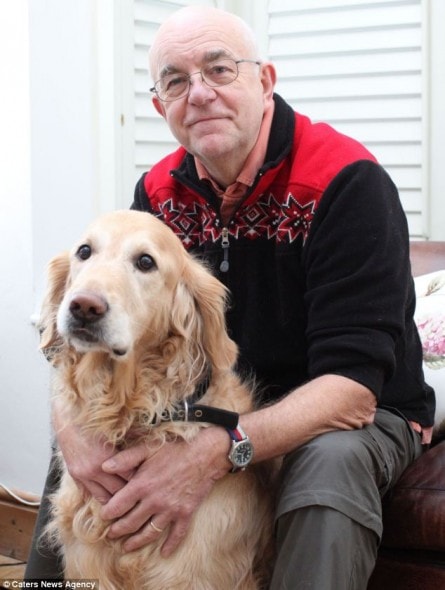 When Kevin and Louise Errington’s cat Stewart went missing their dog Toby came to the rescue. Toby found Stewart badly injured in a bramble bush in their back yard. Toby’s persistent barking alerting the Errington’s to Stewart saved the cat’s life.

Stewart had been missing for about 24 hours and the Erringtons thought he had wandered off. Then their golden retriever Toby started acting peculiar when he wouldn’t stop barking at a bramble bush in the back yard.

When the Erringtons went to investigate what Toby was barking at they found Stewart hiding in the bush. Stewart was badly injured after having apparently been hit by a car.

“Steward and Toby are the best of friends,” said Errington. “We were starting to worry when we hadn’t seen Stewart for a day, but we weren’t too concerned. But Toby knew something was wrong.”

Stewart’s injury was so severe that his pelvis had been completely detached from his spine. The Erringtons rushed Stewart to the veterinary clinic where he immediately underwent surgery. He still has significant nerve damage in his right leg, but is on the road to recovery.

“Toby is an absolute hero,” said Errington. “When we found Stewart he was down in the brambles, freezing cold and only minutes from death. Toby wouldn’t leave his side. They really are the best for friends.”