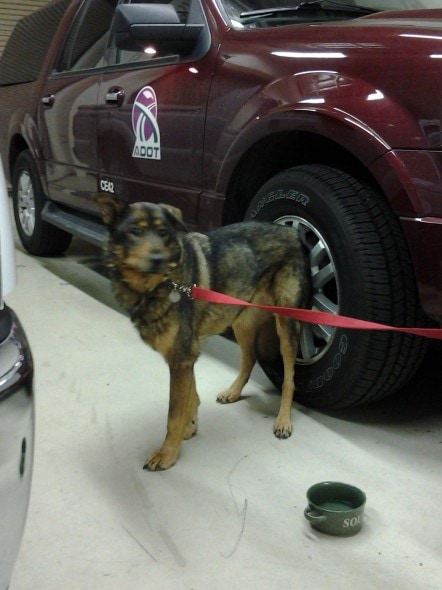 Lexi had been missing from her family for over 10 days when she was spotted near a busy road by a road crew. After watching her almost get hit by a truck the workers with the Arizona Department of Transportation went out of their way to save her.

Steve Maynard and A.J. Gonzalez with the Arizona Department of Transportation were traveling on State Route 260 on January 9th when they spotted a German shepherd mix. When they saw it almost get hit by a truck they knew they had to help.

“The dog was growling a little at first, but she eventually came over to us,” said Gonzalez.

Once they had Lexi safely in their vehicle they took her to the nearest ADO maintenance yard and bought her some treats from a local pet store. Maynard took Lexi home with him until her owners could be located.

Using the information on her tags they were able to track down Lexi’s owners. It turns out Lexi had been missing since the holidays and her family were shocked and relieved to get the call from ADOT that Lexi was safe.

“The owners were so happy,” said Maynard. “They had pretty much given up hope of finding her, so to call and let them know their dog was alive was a great feeling.”

2 thoughts on “Arizona Department of Transportation Workers Save Lost Dog”