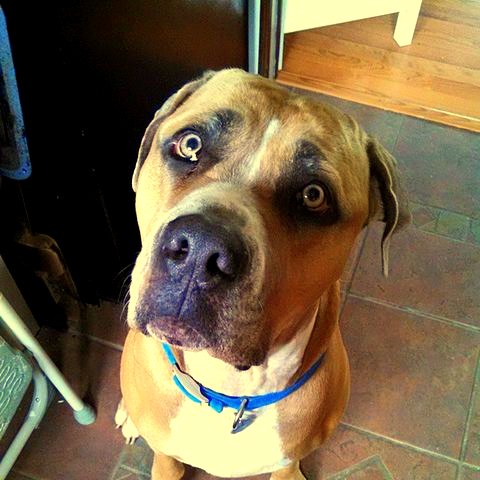 From a dog lover:

In April of 2013, I unexpectedly lost my dog to cancer. I was devastated since it was the second dog I lost within five years, and decided I was going to wait awhile until I adopted again.

One night in May, out of the blue, my teenage son started talking about how when we get another dog he wants a Bullmastiff. We were one month away from moving to a smaller house and I jokingly said, “Since we need to downsize our furniture don’t you think we need to downsize our next dog as well?” Literally an HOUR later a picture of a dog shows up on my Facebook feed….an eight-month-old Bullmastiff mix named Hooch that a vet tech friend of mine was desperately trying to find a home for.

He was in a house where a crime was committed and was surrendered to animal control. At eight months old, he was already 100 pounds and they had no room to keep him. They brought him to the vet office where my friend worked hoping they could board him….otherwise they were going to have to put him down.

After much convincing, her boss gave her five days to find Hooch a home. I really kept trying to scroll by that picture but something kept bringing me back, and after showing my son (who convinced me this was no coincidence lol) I contacted my friend and arranged a meeting. After meeting Hooch for 5 minutes I knew he was coming home with me.

Hooch is literally the sweetest, friendliest dog I have ever had. I swear sometimes he is a human in a dog’s body. He is my 110-pound shadow, lap dog (he thinks) and cuddle buddy. My house may be smaller, but he definitely made my heart bigger. I couldn’t imagine life without him 🙂

From The Animal Rescue Site.  They sell lots of animal-themed merchandise and pet products, and for every item – be it a shirt, sneakers, purse, coffee mug, Kong toy – they sell, a corresponding quantity of food is donated to shelter animals!