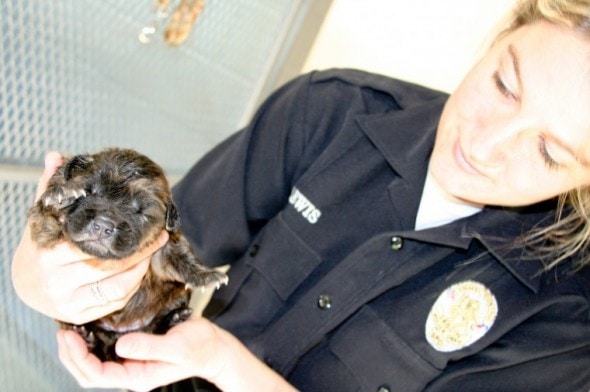 A puppy at Seguin Animal Services in Texas became trapped in a pipe on Friday. Thanks to the help of firefighters and city facilities crews the frightened puppy was safely recovered.

Leah Lewis, supervisor at Animal Services, came to work early on Friday and was alarmed to hear distressed sounds coming from the kennel area. Two three-week-old puppies, part of a litter of seven, had squeezed through a tiny opening in the door of their kennel and got into some trouble when they decided to explore a drain pipe. Lewis was able to reach the male puppy, but the female puppy was too far under the floor. “The puppy was just screaming,” she said. “The panic just set in, it’s just a little baby and you don’t know what to do. You just want to get her out to safety.”

Lewis called the fire department to ask for advice on what to do. “I started describing the situation and you hear the puppy screaming in the background. They just said, “Why don’t we come on over there?” The fire department arrived along with city facilities and water crews. They located the puppy using the waste water department’s sewer cameras. They then began chipping up the floor until they could safely get to the puppy. She was removed from the pipe uninjured and reunited with her mother and littermates.

In total it took rescuers two hours to rescue the puppy once she had been located. “We could hear her in the pipe, but didn’t want to tear up the pipe and end up right on top of it,” said Seguin Fire battalion chief Gerald Weniger. “You just hate to see anything happen to it, it’s only a puppy. As long as we can get to it, we were going to try for it.”

The puppies’ escape was the first of its kind at the shelter. “We’re going to be putting in a plug into the kennel drains after we finish cleaning each day so that this never happens again,” Lewis said. The puppy and her littermates were born at the shelter and will not be ready for adoption for several more weeks. The puppy still hasn’t been named and might be getting one based on her ordeal. “I think we should name her Trouble,” said Lewis.