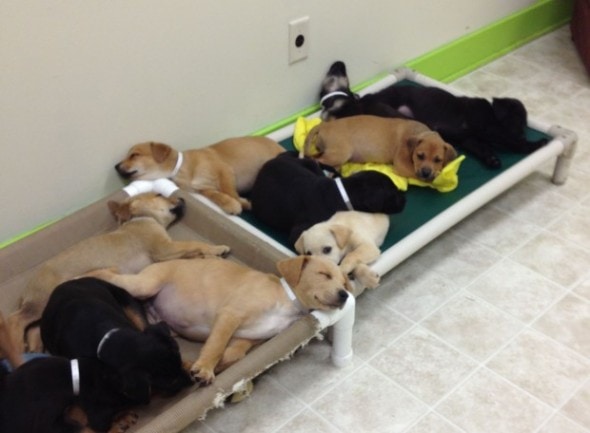 Karen Read was driving in Porter, Indiana late Friday night when saw a set of eyes in the road reflected in her headlights. She stopped her car for what she thought was just a raccoon, but what she found was a mother dog and numerous puppies abandoned by someone who sped off when she pulled over.

Read quickly called her husband to help. Read and some local residents started gathering up the puppies that were running away in various directions from where they had been dumped on State Park Road. As her husband came to help he found eight more puppies running loose and picked them up. In total 17 puppies were caught Friday nights.

They were unable to catch the mother dog on Friday, but she was safely captured by Porter Animal Control by Monday. The puppies were taken in by a local foster organization, Lakeshore PAWS. The puppies appear to be from two separate litters.

Read was unable to see who was in the SUV that dumped the puppies, but did identify it as gold. Porter County Sheriff’s Department is asking for the public’s help in identifying those responsible for dumping the mother dog and the 17 puppies along the side of the road Friday night. Anyone with information is asked to call Porter County Animal Control at (219) 477-3110.