Cocker spaniels missing for a week are found and brought home 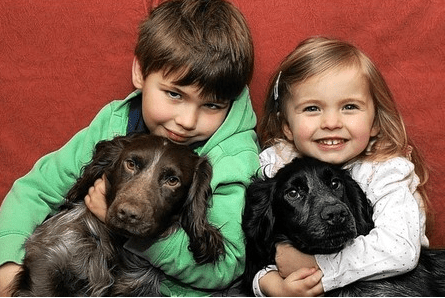 Two beloved dogs have been returned to their owners after a massive campaign to find the missing pooches paid off.  The dogs, both cocker spaniels, were feared stolen after the 20-month-old pets disappeared from their farm, near Camelford in bad weather two weeks ago.  The breed has become very popular since Prince William and Kate Middleton got one last year.

The dogs are owned by Matt and Laura Goodwin, whose children Ollie who is 6, and Tilly who is 3, were devastated by the loss.  “There is big business in working dogs being stolen,” said Goodwin.  “And whilst we knew the dogs had run off, as time went on without news there was always the concern they might have been picked up and sold on quickly.  Our biggest fear was that we would never know what had happened.”   The dogs are popular to sell, but are also often used as bait in dog fighting says Pauline Reed, of Kevelek Gundogs in Cornwall, “There are very well-organised gangs out there.”

The Goodwins used every means possible to find the dogs, including social media, local papers and word of mouth.   The post on the local news site had 2000 views in 24 hours and eventually led to the pups being found and rescued.  A truck driver spotted the dogs, who after 6 days on their own were cold and hungry, but otherwise unharmed.  Then a couple driving by recognized the pups from the pictures they had seen online and returned them to the Goodwins.

“It was really heart-warming, everybody got involved and people cared enough to share,” Goodwin said.  “A kind couple had hold of them by the side of the road then another car pulled up. The second couple exchanged all their details and proved their address and ensured our dogs got back to us.”   So, a happy ending for a pair of pooches and their family, who will not be letting them out of their sight for quite a while.