A brutal practice in the illegal dog fighting circuit sacrifices smaller animals as bait to excite the dogs before they go in the ring. 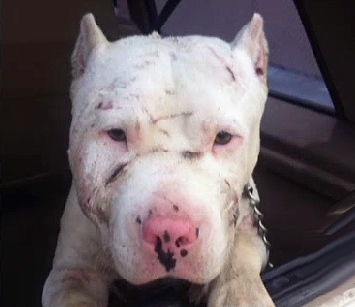 Dog experts say the worst of the fighting rings are concentrated in areas throughout Los Angeles, mainly in Pacoima, Panorama City, Sylmar and Van Nuys. Fight organizers in these areas have been subjecting thousands of animals to abject torture for the sake of entertainment: police and local rescuers have seen enough, and are determined to put an end to dog fighting.

“Sometimes, they’ll cut their face up to draw blood on their face,” said Sasha Abelson, an independent dog rescuer, describing how handlers ‘prepare’ the bait animals.

“People will steal family pets, cats, puppies and throw them into the rings to excite the fighting dogs,” according to Abelson.

1-year-old Zeke was recently found on the verge of death after being used for bait. Zeke was riddled with dozens of puncture wounds and lacerations. “The bait allows the fighting dog to taste blood and allows that dog to think it’s OK,” said Kyle Schwab, a 20-year animal rescue veteran with “Smash Face Rescue”, in Van Nuys.

He says it’s clear that Zeke never stood a chance. “His wounds, they’re all defensive – he has no offensive wounds,” Schwab said.

CBS2’s Mike Dinow reports on “bait animals” and how more of them are being abandoned, clinging to life, and are in need of good homes, and if this is the first you’ve heard of this disturbing trend, prepare to be outraged.

Tipsters can qualify for a $5,000 reward by anonymously reporting a dog fighting ring. Call (877) NO2-FITE (662-3483). For information regarding how to adopt Zeke or another rescued dog e-mail [email protected] or visit handpawshearts.rescuegroups.org.

If you’d like to donate towards Zeke’s surgery expenses, please visit http://leonardossurgery.chipin.com/zeke-white-bait-dog.