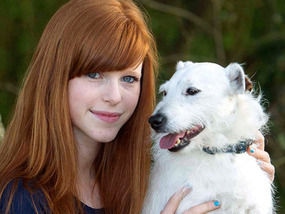 A five day search that led to no sign of her lost dog Charlie prompted Annika Schlemm’s mother to think outside the box – leading to a unusual solution that eventually brought her wandering friend home.

The 15 year old school girl feared she would never see her seven year old terrier again. She and her family put up posters and spent days scouring the countryside to no avail. As the fifth day of searching turned up no result, Annika’s mother Marie-Louise came up with an unusual if brilliant suggestion.

She told Annika to walk in areas where Charlie had last been sighted, and to walk home from there – while barefoot. She reasoned that Charlie would have a better chance of picking up a scent without shoes to get in the way, and that he might just follow the scent trail home.

Annika obliged, spending hours wandering the countryside, foot paths and country roads of a nearby town before making the five mile walk home, feet battered by her journey, a sore ankle acting up.

“Annoyingly I stepped in some nettles and one of my ankles really hurt, so at times I would hobble and limp down this country lane, probably looking extremely odd,” she said. “The thought that this was for Charlie and that this could finally get him home kept me going.”

Her determination paid off. The following day encouraging calls came in mentioning Charlie sightings in town. She went to bed that night exhausted after another day spent searching and yelling for Charlie repeatedly.

“The next morning, a week after he went missing, I woke up before my alarm and an impossible miracle happened. My dad opened the door and in tiptoed Charlie, with his tail wagging. He had got in through the cat flap. I gave him lots of cuddles and I must confess tears were in my eyes. I was just so happy. We haven’t lived in our house very long so I’m sure he wouldn’t have known the way home unless he had followed the scent trail.”

A creative act of love and desperation has reunited the family, who say they are now keeping a very close eye on the beloved dog they adopted from a shelter more than six years ago.