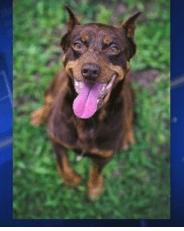 A 7 year old miniature Pincer named Chip is lucky to have been rescued from a shelter by the Humane Society in Naples, Florida.  He is even luckier that they took the time to x-ray him for some health concerns and discovered that he had been shot several times with a BB gun or rifle and had pellets lodged in his chest.

At first it seemed that poor Chip just had heart worms and a urinary tract infection, as if that wasn’t bad enough for the abandoned pooch.  Then humane society veterinarian Dr. Linda George ordered an x-ray to ensure the diagnosis was complete.  That’s when it became evident that Chip’s problems were bigger than anyone suspected.  In addition to everything else he also has some arthritis.

“It is unfortunate that we still see pet abuse cases like this where it is evident the animal was shot by someone” remarked Humane Society Naples Executive Director Michael Simonik. “It is unlikely that it was anything other than cruelty as the dog is very sweet and is definitely domesticated. Chip was someone’s pet that most likely wandered lost and stray until it was picked up by a good samaritan.”

Chip is now being treated for heart worm and his infection but the pellets will stay where they are as they evidently are not causing any harm.  They will serve as a reminder of his unfortunate past, but hopefully he will soon be adopted by a loving forever family and be able to put the past behind him and live a long, safe, and happy life.

The shelter is currently accepting donations to help continue to provide veterinary care for Chip and other rescued pets that require significant veterinary care before adoption to the general public. To donate, please contact Andy Reed, Director of Development at (239) 643-1880 Ext. 21 or visit www.hsnaples.org.