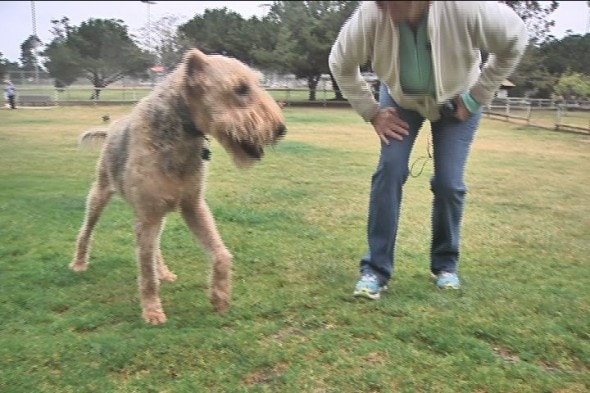 For over a year Billy has been going to the dog park that’s for small and timid dogs in his California town. He’s both deaf and blind and get bullied around bigger dogs. Recently a change was made to the dog park sign to only state the small dogs could be there which led to Billy being kicked out of his favorite park.

Billy has been enjoying a park for small and timid dogs in Orcutt, California for over a year. Billy is older, deaf and almost completely blind. Last week everything changed when the sign at the park changed from stating the park was for “small and timid dogs” to just “small dogs only.” This led to Billy’s owner Marty Niles being approached by a park ranger. “A park ranger showed up and said this is for small dogs only,” said Niles. “I tried to explain to the park ranger that Bill is not only deaf but he’s nearly total blind.” Billy and Niles were kicked out and are not permitted to attend Billy’s favorite park anymore.

There is a park for bigger dogs, but because of Billy’s age, deafness and blindness it’s not a good fit for him. “(He) was jumped on in the large dog park and put to the ground because he’s old,” said Niles. “He just can’t protect himself.” Niles hopes an area for older dogs like Billy can be set up, though when she suggested it to the park ranger she wasn’t too happy with his response. “We said ‘then perhaps you can divide the ‘small dog’ park into two for old, timid, crippled, blind, deaf dogs and his response was ‘well, that would be age discrimination’ tongue-in-cheek, of course, so yeah, we’re not really happy about it,” said Niles.

The change to the park sign came after the suggestion of another dog park user according to the Santa Barbara County Parks Office. They plan to review the incident over the next week.