Betty White is a well-known, longtime animal lover and advocate.  The trustee of the Greater Los Angeles Zoo Association said her passion for animals was deeply instilled in her from a young age by her parents.

“Both my mother and father were tremendous animal lovers,” she said.  “They imbued in me the face that, to me, there isn’t an animal on the planet that I don’t find fascinating and want to learn more about.”

From December 3-10, fans had the chance to win a once in a lifetime opportunity to win dinner with Betty in an auction aimed to help SPCA animals in need.  Bids started at $1000.  There is no word yet on who won or what the winning bid was.

On December 6th, she was honored for her work with animals at a Grinch-themed ceremony in LA, wherein she was named Who-Manitarian of the Year.

“I really appreciate this award, and I appreciate all of you beautiful people around me,” said a flattered Betty. 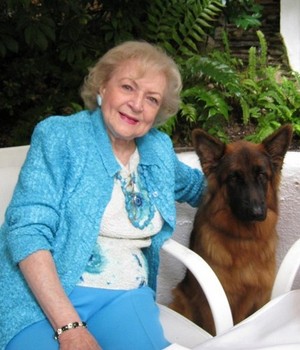 In October she was honored with the National Humanitarian Medal and Legacy Award at the American Humane Association’s Second Annual Hero Dog Awards.  In April Betty was honored by Actors and Others for Animals, receiving the first ever Betty White Inspirational Award, which honors people who appreciate animals and spread public awareness about their needs for protection and care.

Most recently, she attended the one-year anniversary celebration of LA Love & Leashes, which is the first nonprofit pet store completely dedicated to the shelter animals of LA. 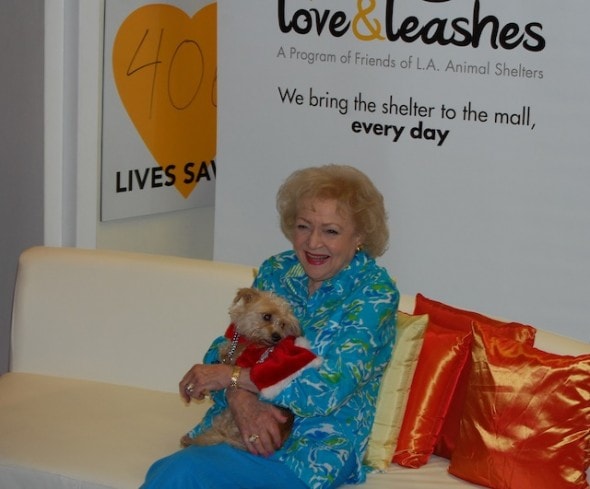 In June, the Golden Girls star got to meet the First Dog, Bo Obama.  He guided her on a special tour of the White House.

“I spent a half hour with Bo stretched across my lap,” she said.  “And that’s a privilege.  He’s just gorgeous.”

Betty has been a busy bee, spending countless hours helping dogs and other animals in need, but she still has plenty of time for her own dog, Pontiac.  Her seven-year-old golden retriever, a former guide dog, was recently donning a cone of shame after an operation, and is free again to lick wherever he likes.

“He had little growths on his leg and he had to have it removed, so he had to wear one of those plastic collars so he wouldn’t take his stitches out,” Betty said.  “Well, he got it off today and he’s a happy Ponty tonight!”

Now she is looking forward to spending a quiet Christmas alone with her wingman Ponty.

“He’s my family,” she said.  “It’s just the two of us for Christmas because I’m alone, and so we just have a cozy day all day.  We look forward to that all year.”