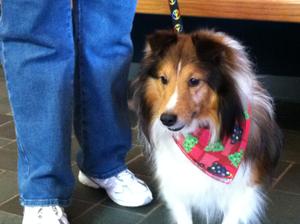 It was a tearful reunion for Christine Johnson and her Shetland sheepdog Marshall.  It had been 16 months since Marshall went missing from Johnson’s Utica, New York home and she is calling it a Christmas miracle that she is now reunited with her dog.

A little over a year ago Johnson let six-year-old Marshall out in her yard. “It was, I’m going to say, maybe 5 minutes max…he just vanished,” she said. For months Johnson and her friends and family searched for Marshall. They sent his photo to local shelters and police departments. As time passed Johnson got another dog but never stopped thinking about Marshall.

Utica resident Jennifer Major-Denicola was driving home from Christmas shopping on Tuesday when she spotted Marshall in the road. Cars were slowing down and swerving to avoid hitting Marshall as he walked in the road, but Major-Denicola stopped her car. “I got out of the car and the cars coming behind stopped…and I’m out in the middle of Oriskany Boulevard and was just like, ‘Come here, baby,’” she said.

On Wednesday Johnson and Marshall were finally reunited. “This is the type of joy you could never replace with a gift, money, anything,” said Johnson. The animal hospital says the dog’s condition suggest he wasn’t fending for himself the entire time. Johnson is grateful for Major-Denicola and her actions. “I love her,” Johnson said. “I thank her for not taking him and keeping him away from me the way somebody else did.” Johnson is now looking forward to spending Christmas with Marshall, and plans to have a few special Christmas treats for him.