By: Nomi Berger of Pomeranian and Small Breed Rescue

Unlike cats with nine lives, dogs have only one. Except for a remarkable Pomeranian named Biscuit, who had six!

Although his origins remain a mystery, the handsome, one-year-old Victorian Pom was found wandering the streets of suburban Buffalo, New York in 2001, and placed in a local shelter. He was soon adopted by a kind and loving man, who was mentally challenged and unable to drive, work or live on his own. 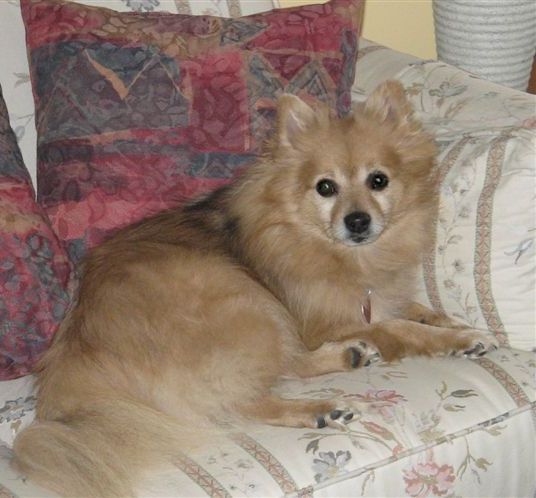 For five years, dog and man were a tenderly bonded pair. Biscuit broadened the confines of his owner’s narrow world, accompanying him on his long, daily walks and providing him not only with companionship, but a receptive ear. When his owner died suddenly of a stroke at 35, the grieving dog and the man’s elderly, grieving mother became, for a time, each other’s only solace.

She cared for him as best she could, but when she entered an assisted-living facility, she regretfully surrendered six-year-old Bisky to a kennel. He was alone again, caged again. And months passed without any interest in the sweet-natured, senior dog.

Although the shelter didn’t want to euthanize him, they were running out of space. And so, in the fall of 2007, they contacted PSBR (Pomeranian and Small Breed Rescue) in Hamilton, Ontario and Bisky was placed in a foster home.

As he embarked on his fifth life, a routine visit to the vet revealed a grade 4 heart murmur. His internal clock had begun to tick, and no one felt it more than his new, adoring fosters. As they started Bisky on his medications, they braced themselves for the inevitable: a very brief encounter with a very special dog.

But to their surprise, the “hard to place” senior was adopted by a lifelong dog owner and professional trainer into what would become Bisky’s true forever home.

For two breathtaking years, ignoring the conventional rules of a slow introduction into a new environment, Bisky’s lovestruck owner immediately exposed his new, adopted dog to a world unlike any other. It was an exhilarating world punctuated by joyous car rides, lavish parties (people not dog) at his winter and summer homes, and above all, obedience training.

With their vet’s permission, Bisky was enrolled in obedience classes, in which he not only learned, but excelled. He was then entered into two events sponsored by the Canadian Kennel Club under the distinguished name: Neapolitan Biscuit of the Parkway (references to his owner’s two residences).

At nine, he was the oldest dog to qualify. But, at the end of the various trials, Bisky, heart murmur and all, had successfully earned both his Novice Companion Dog and Canine Good Neighbour titles.

And so, in June of 2009, the plucky rescue Pom, framed by ribbons and rosettes, added the initials CD, CGN after his given name.

But there was little time to savor the sweetness of his victory. Bisky’s damaged heart became enlarged and he grew steadily weaker. He died eight months later, surrounded by those who had saved and loved him.

As a friend who knew Biscuit said poignantly,

“I like to think that Bisky’s heart was so full of all the love he received that his little body couldn’t handle it. What a lucky dog.”

Pomeranian and Small Breed Rescue is comprised of 40 volunteers, based in Ontario, Canada, dedicated to rehoming and rehabilitating every rescue in their care. They are not a shelter but, rather, a network of volunteers who work to place the dogs in carefully selected foster homes, where they are socialized and any medical or behavioral problems are quickly addressed.

From the unwanted senior to the wandering stray, they are a voice for the voiceless and vulnerable. And since their founding in 2001, they have successfully rehomed more than 600 deserving dogs.