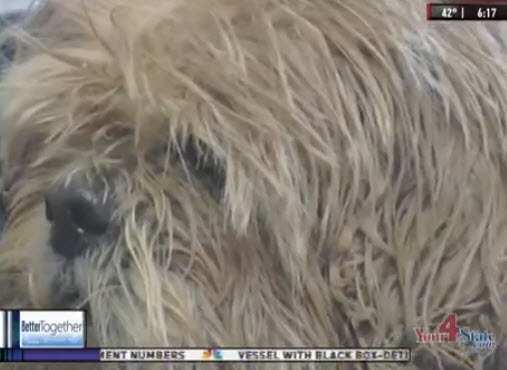 Samantha, a blind and deaf, 14-year-old Lhasa Apso dog from Frederick, Md., spent seven hours trapped in a sink hole on March 31, 2014. Fortunately, she was hoisted to safety by local rescue workers who work tirelessly to get her out of the hole.

The elder canine was out on a walk with her owner Susanne Geary around 7 a.m., when the earth gave way and the dog was sucked into the sink hole.

Immediately, Geary screamed for help and neighbors came out to help the woman and her pet. Authorities were called to the scene and more than 25 rescue workers spent hours trying to secure the pet and safely pull her out of the void.

According to WHAG-TV, Capt. Kevin Fox with the Frederick County Fire department, said the dog was given toys and food to coax her out, and after hours of failed attempts, rescue workers were able to harness the blind and deaf dog and pull her to safety.

The dog was taken a veterinarian clinic for a check up and a bath. She was released later the same day with no injuries.