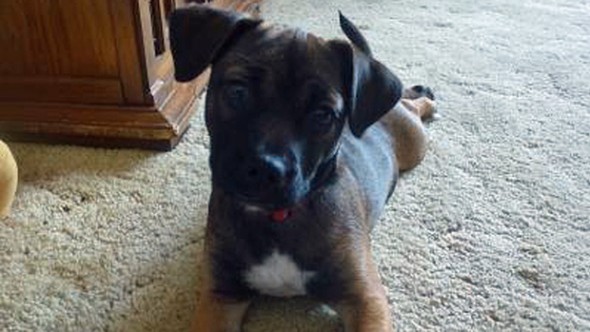 A compassionate U.S. Customs agent has made a young boy in Windsor smile again, by delivering him a new puppy.  On December 21st, Joseph Wilcken and his parents were crossing the border at the Ambassador Bridge with their dog Ash.  They were asked to put Ash, a Jack Russell terrier and pug mix into a crate while their vehicle was being inspected.  When customs agents opened the cage to inspect the dog, he slipped out of his collar and ran off.

Though his family searched relentlessly, contacting local shelters and distributing photos, Ash was not found and Joseph and his family were devastated.  They even had presents waiting under the Christmas tree in the hopes that Ash would eventually come home.  Joseph mentioned Ash every day, and took solace remembering the fun they had together.

The nine year old boy took the loss the hardest, until this weekend when the border patrol agent arrived at his home with a new puppy of the same type as Ash.  The new arrival is named Coco, and certainly brought a smile back to Joseph’s face.  Joseph’s mother, Ana Wilcken, says her son was very upset through the holidays, but now is “so happy.”

The Waterloo family is very grateful to the border patrol agent who went out of his way to make Joseph feel better by giving him a new dog to love.