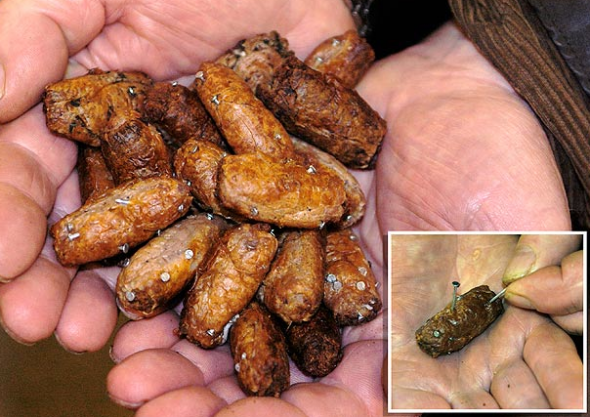 It seems unimaginable that anyone would intentionally hurt an animal for no reason. Yet, it happens again and again, and this time it is especially disturbing.  Dog owners in South Wales discovered sausages filled with inch long nails scattered throughout a park.  They were obviously placed there by a dog hating sociopath and it only thanks to very observant dog owners that they were discovered.

As of yet, there seem to be no cases of the sausages actually being eaten, but the result would almost certainly be deadly for the dog.  The fields in the area have been scoured and many of the booby trapped treats removed, but local vet Ben Hynes fears dozens of dogs could be killed if the saboteur isn’t stopped.

“Luckily we haven’t had any emergencies but if we had, the animals would have been suffering from vomiting, bleeding and I have no doubt the result would have been fatal.  There is absolutely no way that this can be anything other than the intention to kill animals,” said Hynes.

While it is always common sense not to let a dog eat random things it may find on the ground, it is hard to stop a determined dog from gobbling down something as attractive  as a sausage.  Local pet owners are terrified, and rightly so, as no one knows when or how the perpetrator might strike again.

Police are urging people to be vigilant and keep a very close eye on their pets for the time being.  A spokesman said: “This is a very worrying incident, especially as they are being left on playing fields where not only dogs but children could be harmed by these sausages.”

3 thoughts on “Dogs, beware of treats that seem “too good to be true””