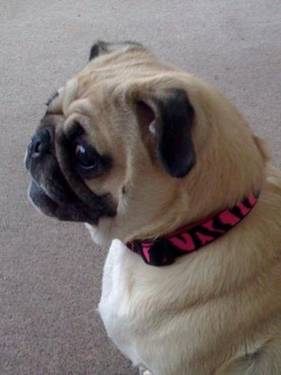 A pug that has been missing since a car accident in early February has been reunited with her owner at last.  Nancy Kiser was traveling from North Dakota back to her home in Wyoming when she was involved in a traffic accident.  When the car door opened her two terrified pugs escaped and ran off.  The pair named Daisy and Tiny disappeared before she could catch them.

Daisy was 3 years old and Tiny just 5 months when they went missing.  “They were scared from the accident. We almost rolled,” she said from back home in Wyoming on Tuesday. “They got kind of tossed.”  Kiser spent the night at the scene, in her car, in the hopes they would find their way back to her since they were ten hours from home.  The next day her husband drove up to meet her and they stayed at an area hotel to continue the search.  Eventually their fears were confirmed when Tiny was found dead having been hit by a car.

A few days later, about 6 miles away, a border collie was persistently barking at his owner and kept going to a hilly area behind their home.  Finally the dog’s owner gave in and make the trek through the snow to see what all the fuss was about.  That’s when she found Daisy, frozen nearly to death.  “She was pretty much frozen solid by the time that she got to her,” Kiser said.

The woman brought the dog home and warmed her up and fed her, also calling the police and other agencies in an effort to find out who the poor lost dog belonged to.  Meanwhile Kiser’s father placed an ad in a local paper where Daisy went missing and the ad was seen by a neighbour of Daisy’s rescuer who alerted her immediately.

Upon getting the call that Daisy was okay Kiser said “Oh man, it was the best thing I could’ve ever asked for right then. We were about ready to give up.  We were ecstatic.”  The family has since been reunited and everyone is thrilled.  “It was awesome,” Kiser said of the moment they reunited. “She came running out of the house. She jumped all over us.  She has not left my sight since then,” she added. “She’s such a sweet little girl.”