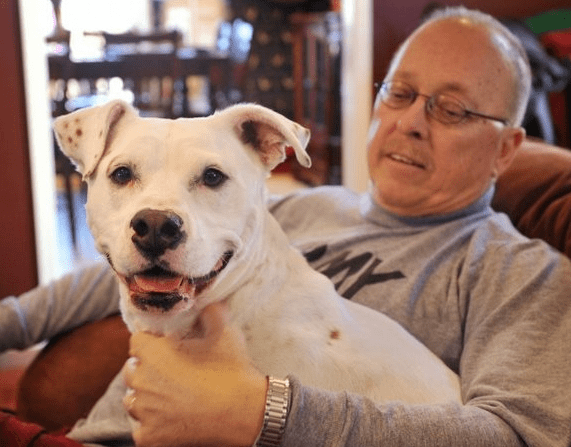 Bruce Martin suffers from insomnia. Every night when he’s up watching movies, his best friend Clyde is by his side. Clyde proved to be more than just good company on February 11th. In the middle of the night Martin suffered a heart attack and without Clyde’s help he wouldn’t be alive today.

It was just another night of insomnia for Martin, with Clyde keeping him company. “Clyde’s my insomnia buddy,” said Martin. “He’d stay up with me while I was watching movies at 3 in the morning.” Clyde was more than just company though on the night of February 11th, he was a lifesaver. “That particular night I got up to cross the room and had the heart attack,” said Martin. “I was unconscious, and when he couldn’t get me to respond he went to get Mitch.”

Mitch is Martin’s wife and Clyde rushed to get her help. “It took him two tries, but he led me to the living room,” said Mitch. “That’s where I found Bruce slumped over the back of the couch.”  Martin’s heart attack was so severe he had to have quadruple heart bypass surgery and lay in the hospital unconscious for two weeks.

When Martin finally woke up one of his first visitors was Clyde, who still watches over Martin as much as he can. He even helps Martin with his therapy. Clyde loves chasing the tennis ball and now that activity helps Martin strengthen his arms. Martin is now able to walk up and down his driveway eight times, and he’s looking forward to the day when he can walk a little further saying, “What I’m really looking forward to is taking Clyde for a walk around the block.”