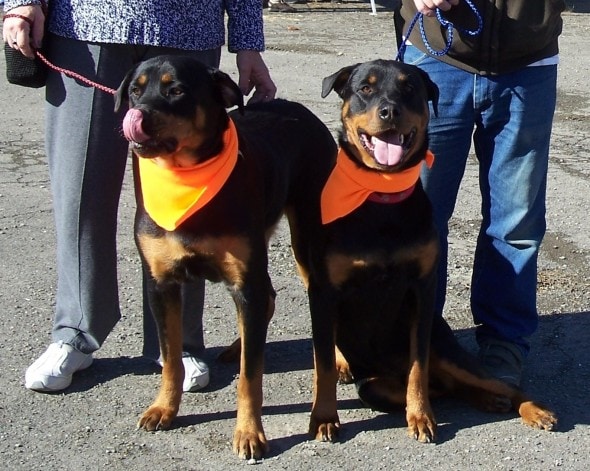 Bleu and Wolf came into the care of Ark Animal Sanctuary in June 2013. They are sibling Rottweilers that have been nicknamed ‘The Boys’.

Their beginnings are a bit of a mystery. Everyone has speculated that they were produced by an unscrupulous, irresponsible breeder who has never been identified. The story from the adoptive owner who eventually surrendered them was that he purchased one dog from a southern Maine breeder only to have the breeder show up at his door with three puppies.

Demonstrating a lack of good judgment, for one reason or another, the adoptive owner handed over extra cash and took all three. He was soon overwhelmed in caring for three growing Rotties, especially since two of them exhibited hip/leg problems. It did not help the dogs’ physical health that they were kept on a porch during their most crucial period of development, with no heat during the harsh northern Maine winter.

The Boys’ owner did take Wolf in for what he described as ‘salvage surgery’ on both hips. Whatever that actually entailed and whether it helped or not is difficult to ascertain. The veterinarian who performed the surgery is another mystery in their story.

Bleu’s issues are basically with his legs. His back legs bow out and his front legs have an area of weakness, causing him to kneel, much like a horse on its knees, when he puts his nose to the ground. 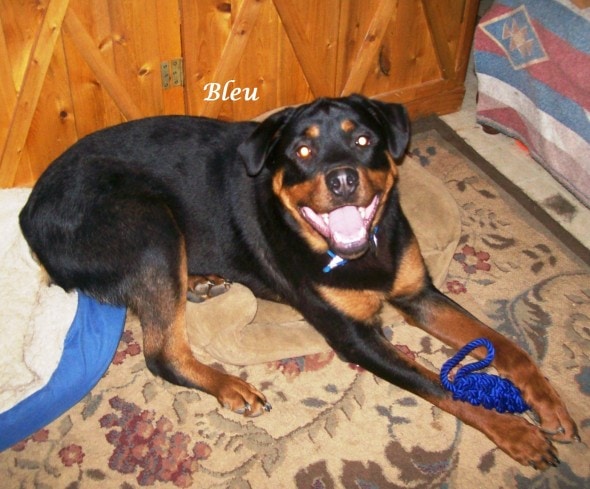 The adoptive owner’s saving grace? He finally realized he was not going to be able to give these dogs the life they deserved and he reached out for help. And the person he contacted reached out to Ark.

Ark Animal Sanctuary has been a lifelong dream and is coming to fruition one phase at a time. In its four-and-a-half years as a volunteer-only, registered 501c3 non-profit that receives no municipal funding, Ark has rescued and re-homed countless companion pets all through a foster program until the Sanctuary is fully operational and staffed.  Bleu and Wolf went into that foster program, into the home and care of Canine Solutions’ owner Arden Tidd (www.CanineSolutionsMaine.com). Under his care since June, The Boys have been integrated with his pack, socialized and loved. In Arden’s own words:

“Neither of them thinks that they are disabled, and don’t really let it affect them. They both are really good with other dogs, cats, and people. Bleu is very sweet, never a bother. Wolf has yet to remember to respect the “space” of others but is still a sweet guy. I haven’t seen ANY real aggression from either of them, although they do protect toys a little bit. They’re just a couple of happy-go-lucky dogs that can be a bit clumsy at times, like a bull-in-a china-shop kind of way.”

Ark considers The Boys Special Needs and wants them to go to a forever home together. The perfect home would understand large dog hip issues, such as implementing ramps instead of stairs, and would be able to give them any further medical care they’ll need throughout their lives. 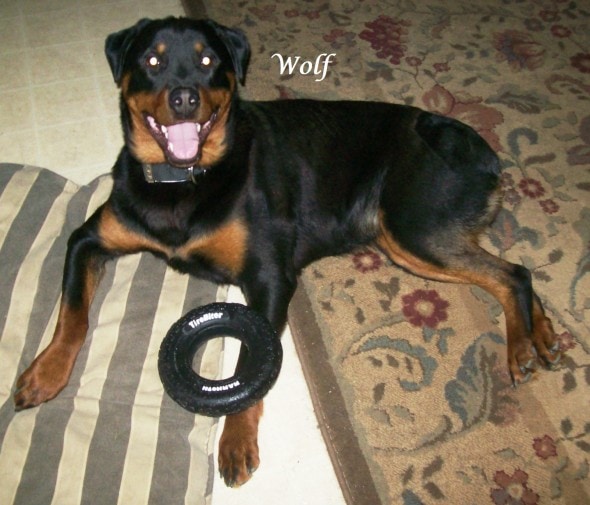 We also want to urge everyone to contact their respective state officials to get better legislation governing breeding practices. Irresponsibility harms animals. No one’s ‘choice’ to breed animals should supersede the price animals pay with their suffering.

The Mission Statement of The Ark Animal Sanctuary is to rescue and provide food, shelter, medical assistance, love and compassion to any animal in need, regardless of age and medical condition that cannot otherwise be placed with a contracted facility. We take full responsibility of every animal placed with us until they find new loving and forever homes.

The Ark is a no-kill organization. Euthanasia will only be considered when a veterinarian recommends it for the best interest of the animal.

We believe every animal’s life is meaningful and they all deserve loving homes.

Thank you for reading our story about Bleu and Wolf.

2 thoughts on “Brother Rottweilers Search for a Special Home”