Miami Marlins pitcher Mark Buehrle is excited to move to Florida with his family, but since all members of the Buehrle family are not welcome in Miami-Dade County, he and his wife Jamie, their two young children and four dogs will reside in nearby Broward County.

At the heart of the Buehrles’ decision was their adopted 18-month-old American Staffordshire terrier named Slater. As a result of a 1989 law banning pit bull terrier-type dogs, Slater is not allowed to live in Miami-Dade County. 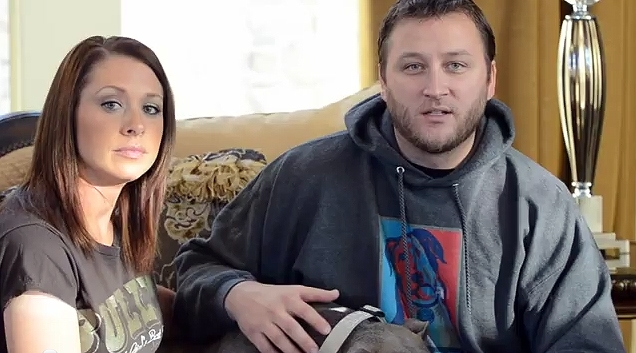 As animal lovers and spokespeople for Best Friends Animal Society, the Buehrles are featured in a new public service announcement, encouraging residents to support HB 997/SB 1322, which finally would overturn the breed discriminatory law. Miami-Dade is the only county in Florida with such a ban, due to an exemption in state law.

Florida State Representative Carlos Trujillo and Senator Jim Norman are sponsoring HB 997 and SB 1322 respectively, with the support of animal experts from Best Friends Animal Society. The bill has yet to be placed on the committee agenda in the Senate. 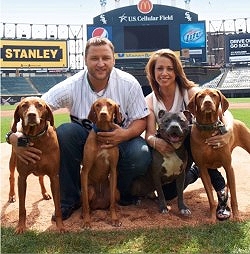 Jamie Buehrle also has written a blog and started a Change.org petition urging support of the legislation at: http://www.change.org/petitions/help-slater-buehrle-save-pets-in-miami-end-the-pit-bull-ban

In the blog, Jamie wrote: “Slater is a member of our family. We had always agreed to make sure that wherever Mark ended up playing, Slater would be welcome. So, when Mark had the opportunity to sign with the Miami Marlins we were harshly confronted with Miami-Dade County’s 20-year-old pit bull terrier ban and immediately knew we would have to live a county over in Broward.”

“Mark and I are fortunate to have the resources to accommodate Slater,” she says “But it breaks our hearts that so many families are faced with losing their family pet simply because a local government has deemed their dog ‘dangerous’ based on nothing more than appearance. We can’t imagine ever having to give Slater up simply because a city says we can’t have him. Not only would we be distraught at that prospect, but our kids would be devastated.”

In the 30-second version of the PSA, Mark says: “My wife Jamie and I were sad to learn that because of a breed discriminatory law, our dog Slater can’t live in Miami-Dade, and could even be killed just because he is a pit bull. Slater is a great dog, and a member of our family, so we decided to live in a nearby county.”

VanKavage says breed-discriminatory laws are expensive and ineffective, citing a study by the economic research firm John Dunham and Associates that estimates Miami-Dade County spends more than $3 million a year to enforce the current law. http://www.guerrillaeconomics.biz/bestfriends/

“In these tough economic times, laws that waste precious taxpayer dollars while failing to accomplish what they set out to do should be repealed,” said VanKavage. “The simple truth is breed is not a factor in bites. Many studies, along with the experience of Best Friends Animal Society, show that breed discriminatory laws are ineffective and result in the deaths of hundreds of pets in Miami-Dade each year.

VanKavage pointed out that not only are these laws expensive to enforce, but they shift resources away from routine, effective enforcement of laws that have the best chance of making communities safer.

“Animal control officers and dog wardens should focus their efforts on dangerous dogs running at large, not target pets that are just being dogs and have a certain appearance,” she added.

The State of Ohio, the only state that designates a breed of dog as vicious, is in the process of repealing its breed discriminatory law, with a Senate vote on HB 14 expected next week. http://www.legislature.state.oh.us/bills.cfm?ID=129_HB_14 Topeka, Kansas recently repealed its pit bull terrier ban because it was expensive and ineffective. http://www.topeka.org/pdfs/SummaryFAQs.pdf

Twelve states including Florida prohibit canine profiling, but Florida’s law grandfathered Miami-Dade’s provision. HB 997/SB 1322 would give pet owners in Miami-Dade the same right as pet owners throughout the state.

“This is America. Responsible dog owners should be allowed to own whatever type of dog they choose, regardless of appearance. Reckless owners should be prevented from owning any dog,” VanKavage said.

Experts at Best Friends Animal Society have for many years encouraged state and municipal governments to adopt breed-neutral, dangerous dog/reckless owner laws that focus on the key causes of dog aggression—owners’ failure to spay or neuter, train and socialize dogs regardless of breed, or because they abuse/neglect dogs or force them to live on chains.

According to the Centers for Disease Control and Prevention, dogs not spayed or neutered are nearly three times more likely to bite than sterilized dogs. Their research shows that chained dogs bite nearly three times more often than unchained dogs, and 25 percent of all dog-related fatalities involve tethered dogs. The American Veterinary Medical Association reports that intact males are responsible for 70-76 percent of reported bites.

VanKagave notes that many states have passed laws that allow all dogs to be evaluated and treated as individuals and permit local jurisdictions the authority to hold reckless owners accountable for the behavior of their dogs.