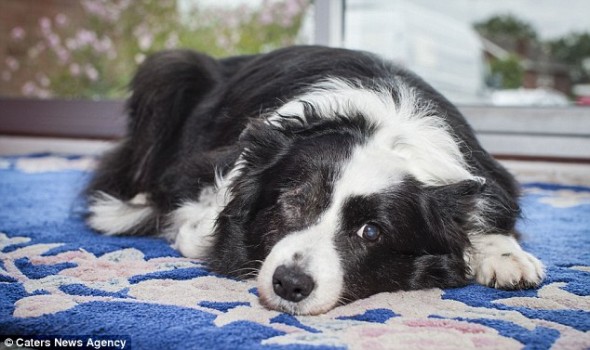 When a burglar broke into the home of an 86-year-old, the resident’s dog Kiri tried to defend the home. The eight-year-old border collie lost an when the burglar kicked her in the face. Now that burglar will be spending 22 months in jail for his crimes.

Kiri’s owner, who doesn’t want to be identified, was at church last September when a burglar broke into the widow’s home in Worcestershire, England. As burglars ransacked the home Kiri tried to defend it. The burglars attacked Kiri in response. Kicked in the head Kiri would lose one of her eyes from the attack.

Kiri’s owner but is distraught over what has happened to their dog. “I can’t believe anyone could be so heartless and cruel to an animal,” Kiri’s owner said. “This has come as a real shock and I am gutted by what has happened to Kiri.” Kiri has become fearful and needs constant reassurance from her owner who is also now afraid to go out and leave Kiri home alone.

Neighbors of the elderly widow and Kiri were disgusted with what had happened and raised a £500 reward to find the burglar. Finally that burglar has been found and will be serving time in jail. A twenty-one year old named David Senior pleaded guilty to the burglary and attack. In total he will serve 22 months in jail, 16 months for the burglary and another 6 months for drug charges.

9 thoughts on “Burglar Who Blinded Dog Will Go To Jail”