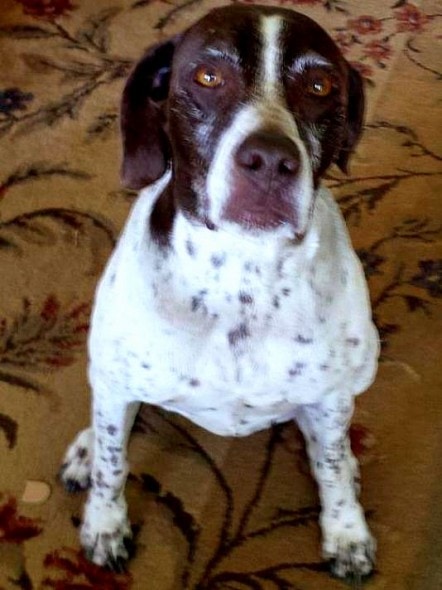 One husband’s story about the listless senior dog that his wife insisted on bringing home from the shelter, and how they got much more out of her than he ever could have imagined.

“Are you sure you want to adopt that dog? She is so lethargic,” I said to my wife, Mary Ann. Indeed, the downcast, sad-eyed, liver -and-white female German short-haired pointer presented a most pathetic sight.

“But if we don’t adopt her, no one else will,” Mary Ann quickly replied, “And you know what will happen to her then? And besides she is already old — look at that gray muzzle!”

Alas, I succumbed to Mary Ann’s wishes and we completed the necessary paperwork along with paying the $35 adoption fee. The dog was ours, or rather my wife’s — as I firmly informed her. The SPCA worker had to use all of her powers of persuasion to coax the extremely reluctant animal out of her cage and on to a waiting leash.

Throughout this whole process, I thought: Oh boy, Here we go again. My wife never met an abandoned dog that she did not want to bring home. She has possessed this tendency throughout our 45-year marriage. But all the previous dogs Mary Ann had brought into our home, each proved animated and anxious to bond with us from the onset.

Not Sadie, however — at least not initially.

But then something strange happened as we walked Sadie into the parking lot, outside of the SPCA complex. All of a sudden, her whole demeanor changed. She became lively, animated and frisky, anxious to jump and run. I remarked to Mary Ann, “What happened? This is certainly not the sad, lifeless, lethargic dog I thought we adopted.”

In fact, over the three plus years we have had her, Sadie has proved quite the opposite. She is by far the most animated of all the dogs we have ever owned — always actively engaged; whether digging in the backyard, demanding at least one walk a day or just wanting to be petted or played with.

She is, moreover, a quintessential “chowhound” constantly craving food — not just her daily allotment of dog food, but also sneaking unattended morsels in the kitchen or scrounging scraps dropped by others while on walks or running free. Sadie is, indeed, a far cry from the pathetic pooch that we first encountered at the SPCA on that fateful day over three years ago much to our relief and, alas, at times, consternation.

Newell G. Bringhurst is a retired College of the Sequoias history instructor and author of several books on the history of The Church of Jesus Christ of Latter-day Saints.