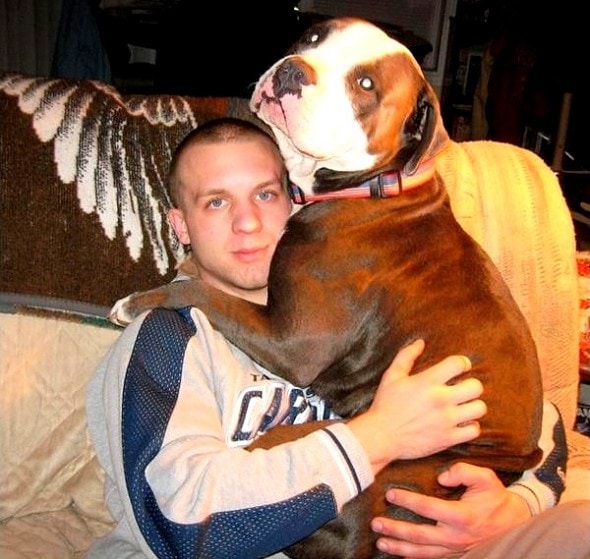 On May 14th we told you about Junior, the pit bull who had been stolen from their North Carolina neighborhood when he jumped the fence.  The next day, a good Samaritan saw one of the stories about the theft and recognized Junior as a new addition to her area.  She called the Bryants, who were overjoyed to have their family be whole again.

Back in February Deborah Bryant let Junior out in the backyard, and, as he had done before, he hopped the fence.  She expected him to come greet her at the front door, as was their routine in this little game of his.  But Junior didn’t go to the door.  He had taken off, so Deborah went out to look for him.

A neighbor directed her to head in the direction of Route 86 South.  When she did, she saw Junior sniffing his way around a church parking lot.  But before she could reach him, a man in a teal SUV sped across the grass median and into the lot.  He got out and snatched Junior up and tossed him inside.

“And I’m running and screaming ‘No, no, no!  Don’t take my dog!’” Deborah explained.  “At that point, there was nothing I could do.”

The Bryants spent months posting fliers and checking animal shelters for any sign of Junior.  Deborah’s 25-year-old son Kevin took it the hardest.

“The dog just loved him to death,” Deborah said.  “When my son would walk into the house, even though Junior weighed 75 pounds, the dog would run to him and jump into his arms.

“All we want is for them to do the right thing and bring Junior back to us, with no questions asked.  Our house is just not the same anymore,” said Deborah.

Months passed, and Junior’s whereabouts remained a mystery.  But on Thursday, May 15th, a woman reading about the theft in NC’s The Herald-Sun recognized the dog.  She took photos of him at his new home and called the Bryants.  When she showed Deborah the photos, it became imminent that a reunion would soon be taking place.

Deborah contacted a Haw River Police Department investigator, who went to the home a discovered that Junior had been purchased for $350 at a flea market.  The residents of the home, a man and his mother, were ordered to give the dog up or face charges.

Junior was driven to the police department where Deborah was anxiously awaiting.  She stood out in the pouring rain and gleefully reunited with her missing boy.

“He was jumping all over me and licking me, and I was crying,” she said. “It was raining, but I didn’t care, because we were just so happy.”

Step two was calling Kevin to say, “I’ve got your boy!”

He was shocked.  Initially, he didn’t believe her, but soon realized this was no joke.

Deborah got home around 10 pm, and the family stayed up until 5 am celebrating.

“I laid on the floor and cried,” Kevin said. “I’ve never cried tears of joy before.”

No charges were filed against the Haw River family, because there is no evidence they knew Junior was stolen.  Kevin gave $200 to the woman who called them, and would like to give her more.

“She never even asked for money,” Deborah said. “But we hope to raise more money to give her.”

Deborah and Kevin were so excited that they drove around their town of Hillsborough to show everyone that Junior was home.

“People got out of their cars to pet Junior and say they had read about him in the newspaper,” she said. “So many people said they read the story.”

The family will now be keeping a much closer eye on Junior and will make sure there is no more fence-hopping.  For Kevin, this emotional reunion is like a new beginning.

“It’s been like going through hell and finally getting out,” he said. “All the pain has been washed away.”