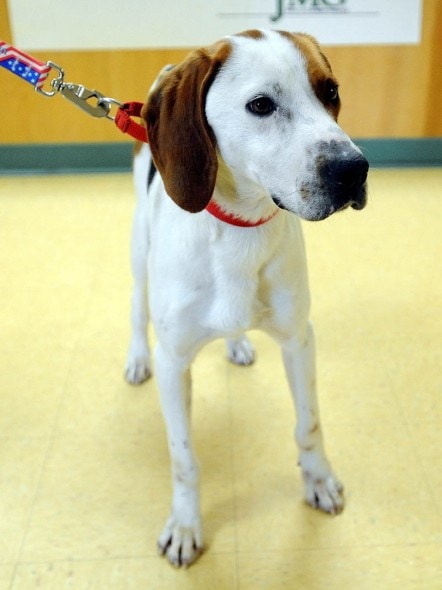 It was a close call for a beagle mix from Mount Vernon who got stuck in the frigid water of Long Pond on Wednesday morning.  The lonely pooch fell into the water after going for a run on the ice, and fortunately the event was witnessed by several people who managed to get the dog back to safety. He was not wearing a collar or tags and is now at a local shelter, waiting to be rescued to yet again.

The dog was 100-200 feet offshore when it fell in and with freezing temperatures would not have lasted long.  Thankfully the bystanders who saw it happen were able to coax the pooch back toward the dock, but it couldn’t get out.  “It couldn’t seem to get its hind legs out of the water,” said Dawn Jacques, who was present.  One person tried to hook the dog with a tow line but that didn’t work.

Then a man walked out on to the ice with a rope to attempt to retrieve him, but the loop in the rope came apart when he pulled on it.  Fortunately at that point he was able to grab the dog by one paw and drag it out to safety.  “It was heart-breaking; I have two dogs of my own,” Jacques said. “To see the dog struggle and hang on for its life, it was really sad. The look in the dog’s eyes when we were loading him into the truck — it was so thankful to be out of that cold water.”

Animal Control Officer Kathleen Ross arrived and took the dog to the Humane Society Waterville Area, on Webb Road in Waterville.  “He’s a very fortunate dog, and I’m hopeful the owners claim him,” she said. And if the owners can’t be found, “I’m sure somebody out there will fall in love with him.”  The pooch was thin and so far no one has claimed him, but one of the women who helped rescue the dog has stepped forward to adopt him if an owner doesn’t emerge.”  Hopefully the adorable pup will have a happy ending as result of his misadventure on the ice.